My daughter and I took an incredible trip in 2009 out to Colorado, Nebraska, South Dakota, and Wyoming.  It was Melody's first trip Out West, and we had a blast.  I had started to write up a trip diary, but I only documented the first day with any detail.  I had forgotten all about it until I came across it this afternoon.  Here it is.  Enjoy!

Day 1 - 5/14/09:  Melody & I were taken to BWI airport by Grammy & Pap Pap (Mom & Dad) for our 7:30a flight to Denver.  I promptly lost my cell phone somewhere between the car and the entrance to the terminal, but didn't realize it was missing until after we went through security.  Not a very good omen for our trip.  Spent most of the 4 hour flight trying to figure out what to do.  It was an uneventful trip.  After we landed and went to baggage claim, I found out I was being paged.  It was a message from Dad - they had my phone.  A very nice lady/airport employee graciously allowed me to use her cell phone to call him and he informed me that a Skycap employee found the phone and dialed the last number called, which was Dad's cell phone, and Dad picked up the phone for me.  I was greatly relieved, but still didn't know whether we should arrange to have the phone over-nighted to me or whether I should just do without.
Melody and I got our rental car, a 2009 Dodge Nitro.  It was a mess.  It had about 35000 miles on it and it had not been cleaned.  The Dollar Rental Car employees were no help at all.  They just told me to document it.  We decided to get some lunch, since it was about 11:30 by this time.  We had a nice meal at TGIFridays in a suburb of Denver.  Then we stopped at a Verizon Wireless store to see if we had any options with my cell phone.  I told the guy there that my phone was lost.  He proceeded to ridicule me for not purchasing the $6/month insurance on my phone, and that it would cost me over $200 to get a new phone.  That certainly was not an option.  I figured we would see if Dad could Fedex the phone to me at the next hotel we planned to stay at (in Deadwood, SD).  We decided to stop worrying about the phone and get on with our vacation. 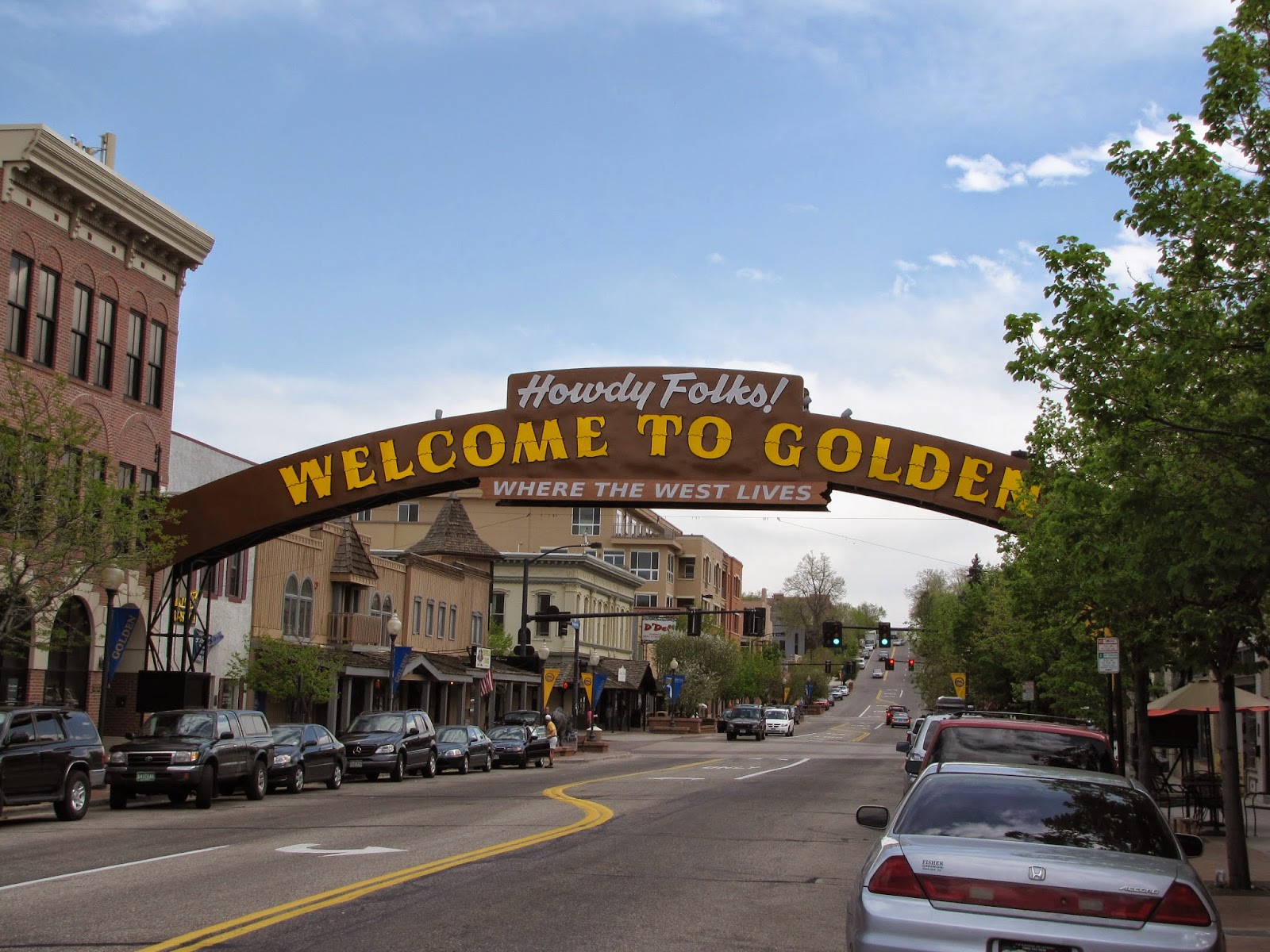 We headed west from Denver and stopped in Golden, CO.  What a beautiful town!  We walked around a little bit, took some pictures, then drove up to Buffalo Bill Cody's grave and museum. 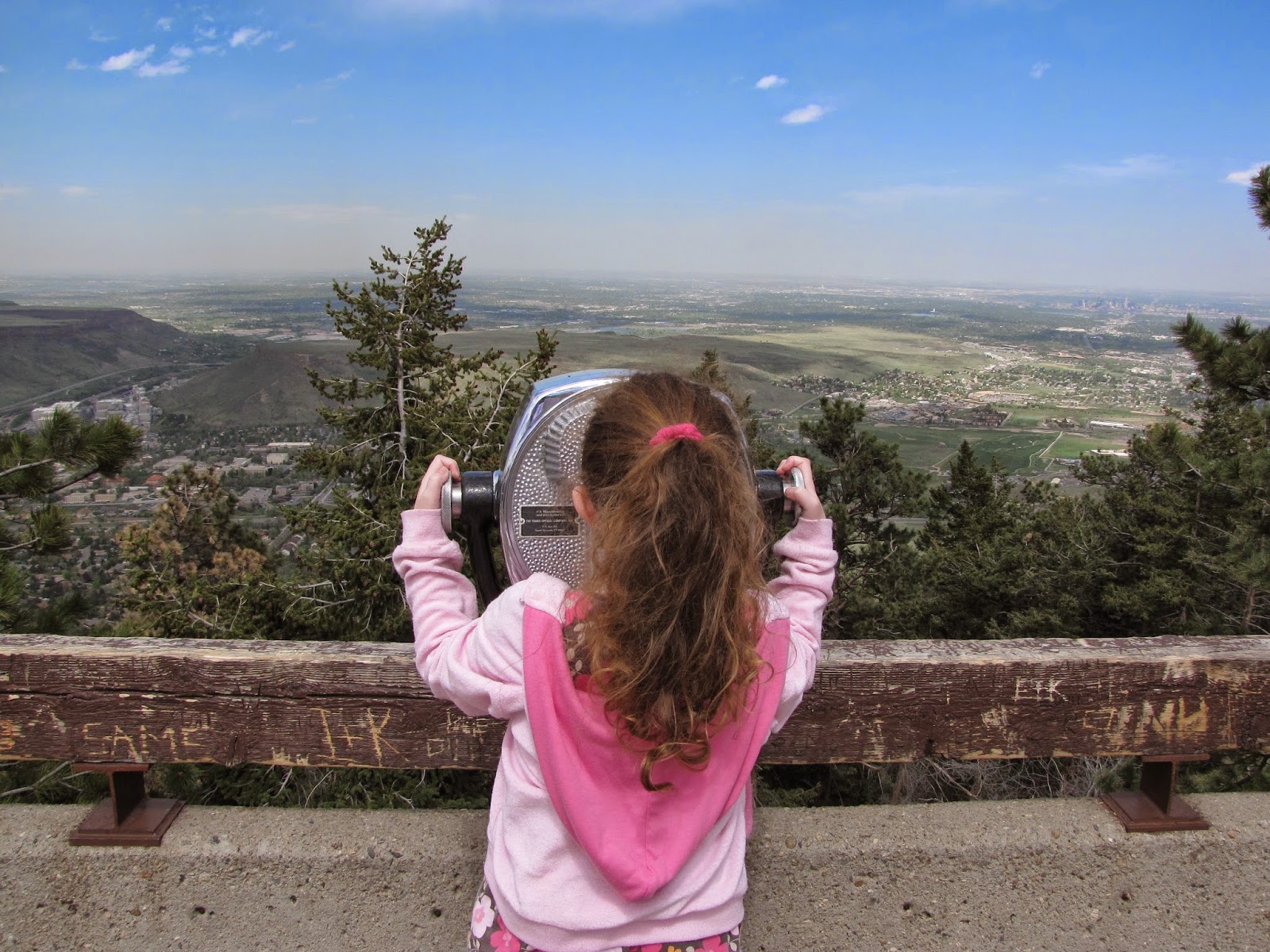 Spectacular drive to the top of Lookout Mountain, and great view from the top.  The museum was just like I remembered it when I was here in Oct. '97.  Melody was a bit scared of the life-size figures in the museum, so we left about 15 minutes after we arrived. 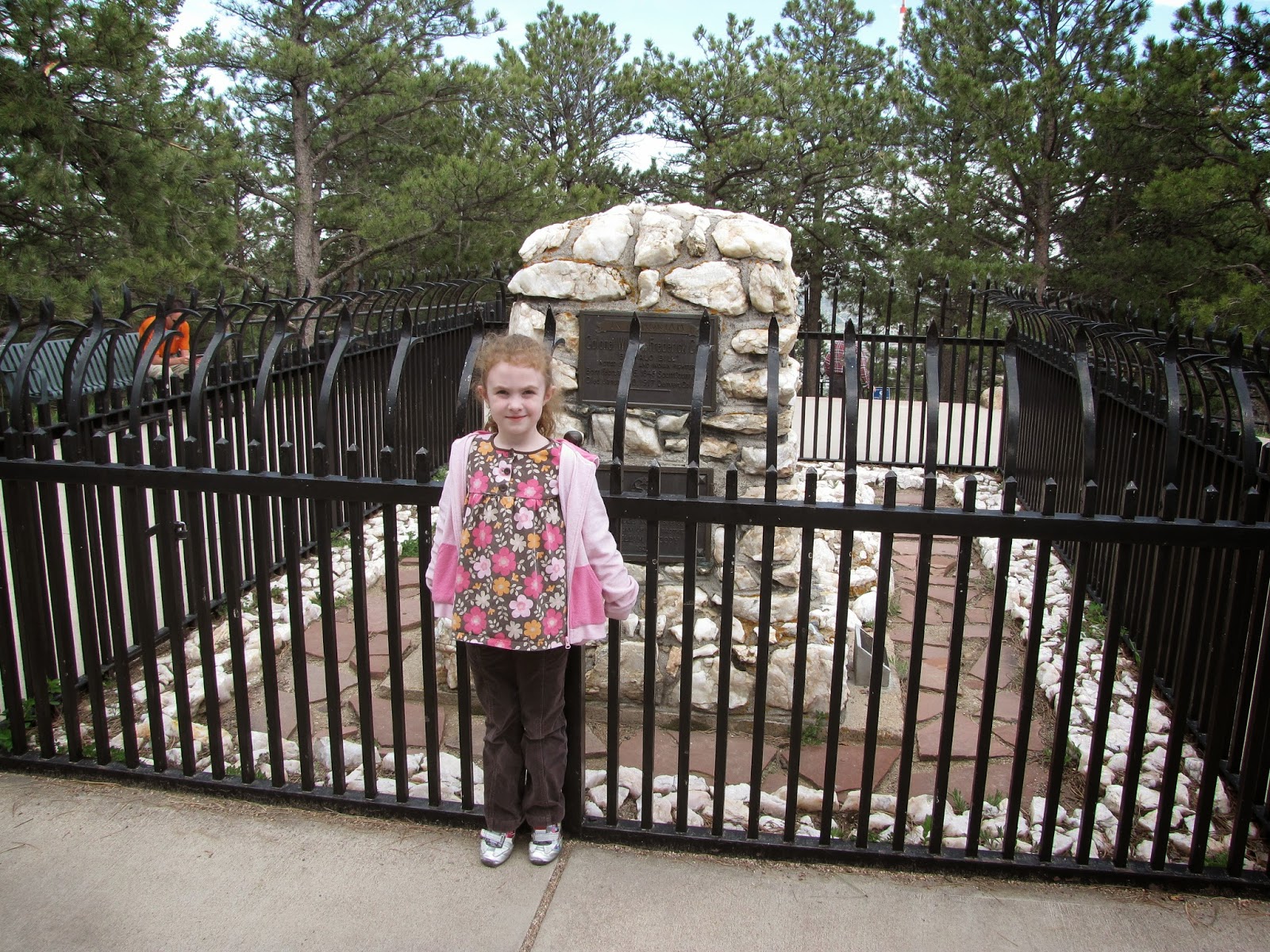 We hiked up to the grave site, though.  We got back in the Nitro and headed back down the mountain.  On the way down, Melody saw three foxes, and couldn't stop talking about them for the rest of the day.
We continued on to Boulder, CO.  It's a neat college town, with a central mall area (which regularly appeared in the show, MORK & MINDY).  We proceeded to 1619 Pine St., which is the location of the house Mork and Mindy lived in during the show.  The house has been fixed up a little, but you can still tell it's the same house. 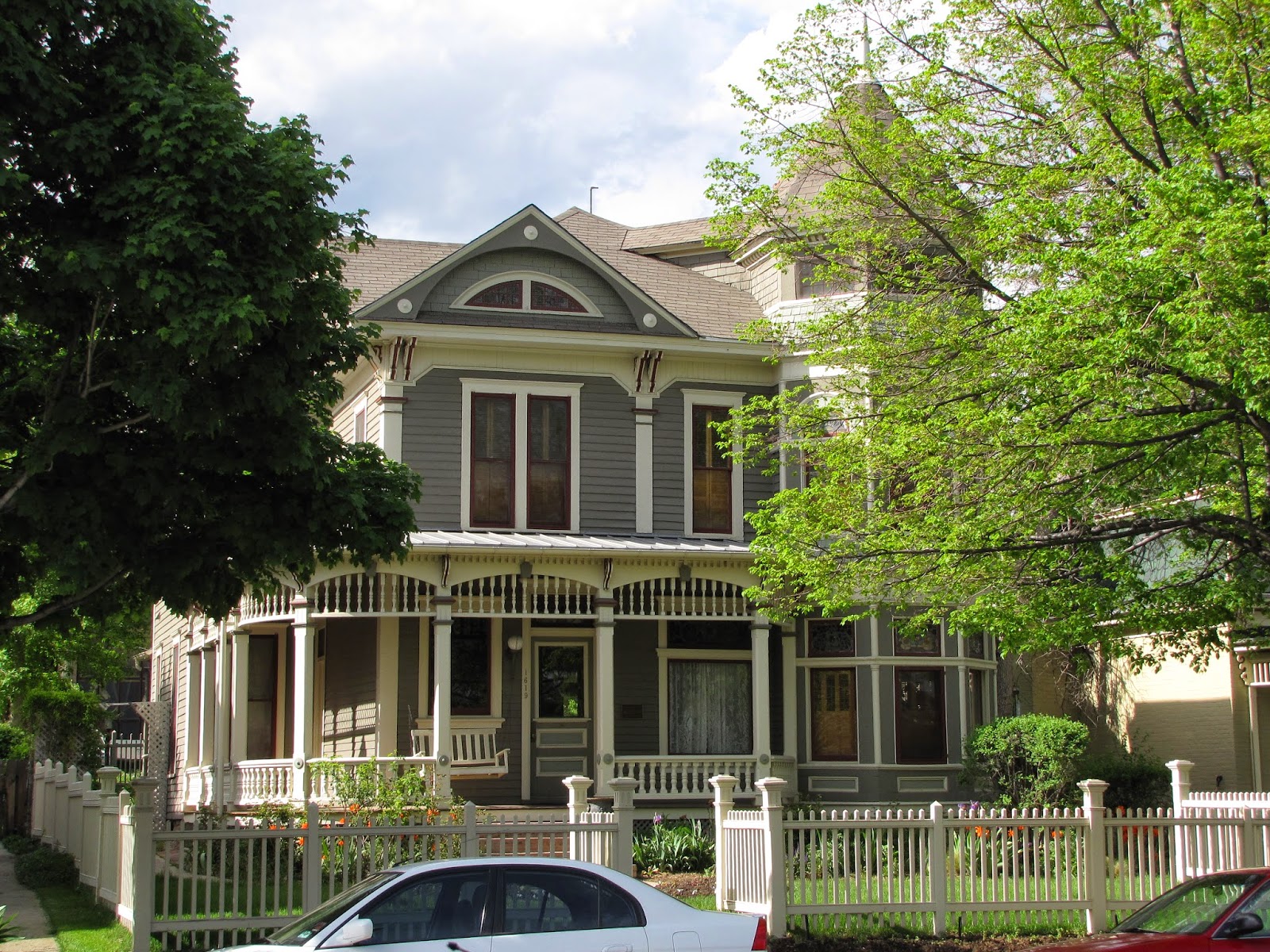 We then continued on a scenic drive up to Estes Park, CO, which is the gateway to Rocky Mountain National Park.  Estes Park is another one of those gorgeous towns in the heart of the Rockies, and, while looking for a place to eat dinner, we encountered several Elk eating on the side of the road. 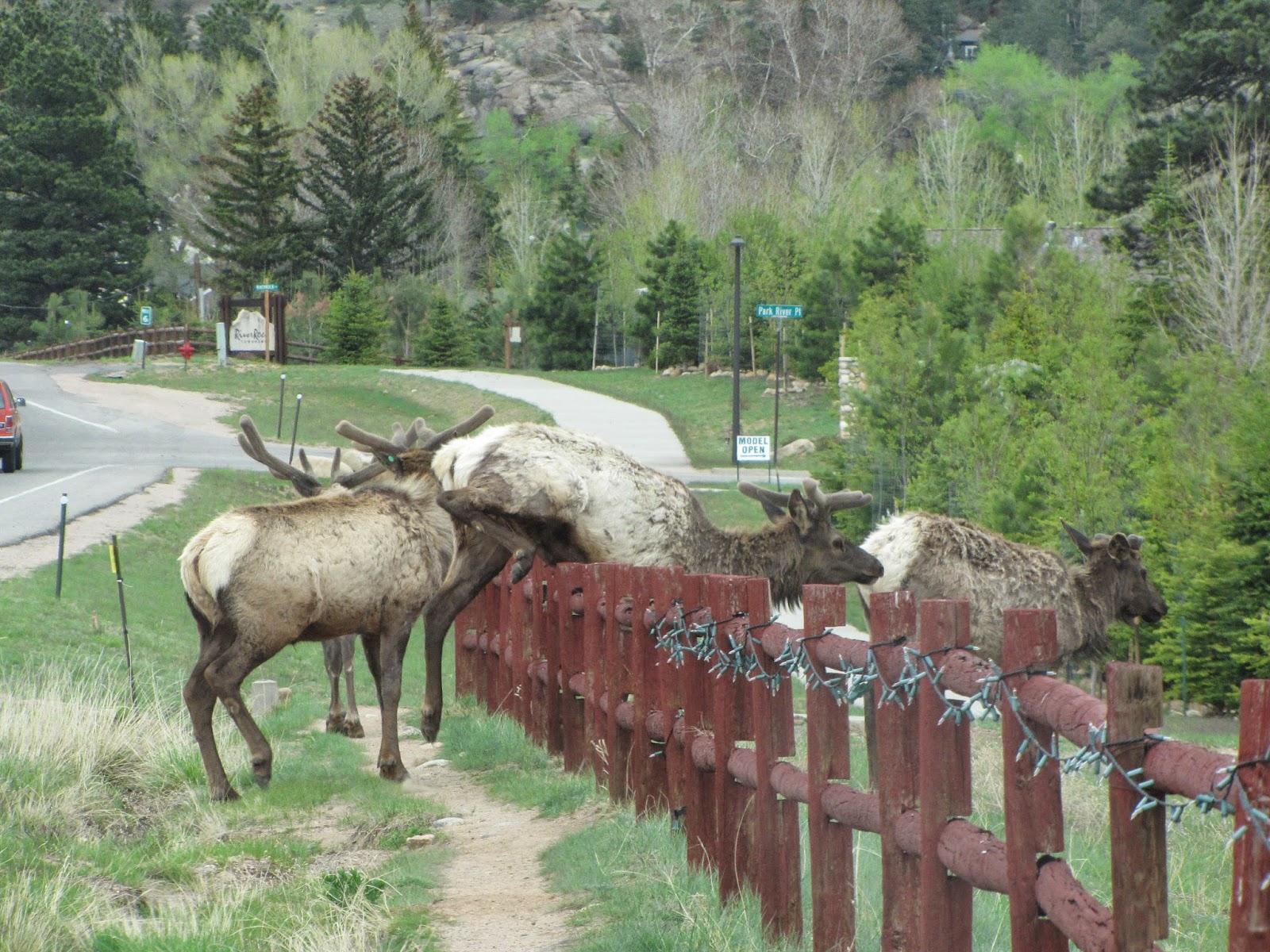 We stopped and took a bunch of pictures, then continued to Smokin' Dave's BBQ & Tap house.  Delicious barbecue and great view out the window of the place.
We got back on the road, but figured we should try to find a pay phone and call Dad.  We finally found one that worked and called him collect.  He said he would have my cell phone over-nighted to our hotel in Deadwood, SD, where we planned to arrive on 5/16.  I thanked him and we continued down the road.  I had originally intended to get as far as Cheyenne, WY, for our first leg of the trip, but it was getting late and I was tired.  Melody had already fallen asleep.  So, when we arrived in Loveland, CO, and looked for a hotel and found a Comfort Inn, where we stayed for the night.  Whew!
Thank you, Lord, for this opportunity to take such an incredible vacation!  I pray that you will keep us safe, happy, and healthy during the entire trip, and blessings on everyone who makes this possible.  Amen.