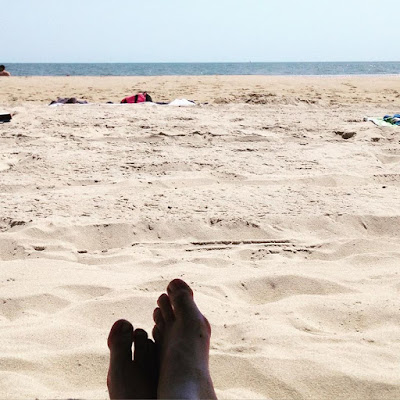 I'm back!  Again.  If it seems like I disappear every couple of weeks, it's true.  First it was another business trip, this time to Atlantic City, then my daughter and I had a fun getaway to Williamsburg, VA, and Ocean City, MD.  It was our last hurrah before school resumes.

I'm not sure I have much to say about Atlantic City.  At one point, I guess it was the Las Vegas of the East, but it sure isn't a pleasant place to visit, in my mind.  My wife and I went to AC about 15 years ago, just for an overnight, and it was my only visit there before this one.  It seemed a bit nicer back then, but that likely had more to do with the company than the environment.  This trip was rough since I had to work, and I ended up with some serious allergy issues the first night after arriving, which lasted all week.  It was likely caused by the terrible weather and the smoke, which was heavy in the casinos.  Since I don't bet, I avoided them other than dinner the first evening with my colleagues.  I had an awful night, and the following morning was worse.

The drive up was pretty miserable, as well.  I drove instead of flying, since, mapped out, it was only supposed to be a two and a half hour drive.  But it was raining when I left home, and there was a serious accident just beyond Aberdeen on I-95, which resulted in a lengthy detour and heavy traffic.  The approaches to the dreaded Delaware Memorial Bridge were also gridlocked, so it was slow going until I bailed off at US 40 towards the coast.  My two and a half hour drive ended up being a solid four hours.

Aside from some rain the following morning, it actually cleared up and was somewhat pleasant, weather-wise.  Your Federal Government employees worked very hard all week, and we accomplished a lot during our meetings there.  We had a few good evening meals and fed on each other's companionship.  I have great colleagues.  By Friday, I was ready to come home, but I woke up with severe congestion and felt miserable.  I knew, though, that after arriving at home, and repacking, I was going on a nice vacation with my daughter, so I trudged on.  I didn't have too much traffic, and I was able to get to my daughter, who was staying with my parents, by early afternoon.  She was happy to see me, and anxious to hit the road to Williamsburg.

We were soon on our way (with a heavy dose of meds), but as we reached the approach to Brandywine, on US 301, traffic slowed to a crawl.  Brandywine used to be a fairly rural area, with few businesses, but over the past several years, a huge shopping center was built.  It was already a congested stretch of highway leading down to Waldorf, but this was a whole different kind of congestion.  It's the type of traffic that slows regardless of the time of day.  Developers and county planners really did the public an injustice, because the shopping area really wasn't needed, given the excessive development in Waldorf, but since Waldorf is in Charles County, Prince George's County wanted a piece of the action.  The result is a ridiculous stretch of road that you can forget about rushing through.

Once past this slow stretch, and the long trek through Waldorf and La Plata, traffic picked up...for about 10 minutes.  Then traffic came to a halt.  It turns out that there was a disabled vehicle on the Potomac River Bridge, and traffic was alternating through the area.  We ended up stuck for almost an hour.  After we got over the bridge, traffic moved pretty well, but I was leery of what traffic on I-95 might be like approaching Richmond.  Instead, we took US 17, which is actually a nice drive, but not very fast.  We were moving, though, so that was a good thing.

We got to Williamsburg by early evening.  I was dog tired, but we were anxious to enjoy a few hours at Busch Gardens, and ride the new coaster, Tempesto, so we went to the park and actually had a nice time.  The weather was very pleasant, and it wasn't too crowded.  While I was still feeling awful, the smile on my girl's face was enough to keep me going.  Tempesto was pretty cool (though very short), and we were able to ride in the front seat, too.  The park put on a nice fireworks display at the end of the evening, and then we rushed out to our hotel to crash.  And I did.  I was exhausted.

I'll write a bit more about the fun side of our trip later, particularly our great few days at Ocean City.  For now, have a great evening, everyone.  It's really nice to be home!