Today I am $7500 poorer after buying a new heat pump/air conditioner.  After a month without cold air, I am finally feeling relief in my own home thanks to temporary portable window units that will tide me over until  my new unit is delivered, which will take about 2 and a half weeks.  But at least we're comfortable.

I spent a beautiful evening last night at Prince George's County Stadium in Bowie, MD, with my daughter and my dad, to see the Bowie Baysox (AA affiliate to the Baltimore Orioles) take on the Altoona Curve (AA affiliate to the Pittsburgh Pirates).  It turned into a pretty exciting game after starting out as a bit of a pitching battle early on, but the Baysox took the win.  We were rooting for the Curve (as Bucs fans), even though Bowie was the home team, and there were quite a few Curve fans in attendance.  The weather was just awesome, and, after the game, we were treated to a great fireworks display sponsored by Busch Gardens. 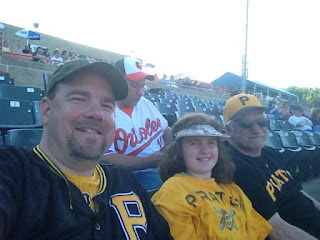 My daughter, after hearing about it from my parents, wants to watch the video I took back in 2003 of when my wife, Teresa, and I told my parents that we were expecting.  It's a fun video, especially since we took them completely by surprise.  My father, on the day we were married, told all of our wedding guests how excited he was that Teresa and I were married because it meant he was that much closer to being a grandfather.  In fact, he told us to get started that night.  Several weeks later, Teresa, in her inimitable style, told my dad that, if he wanted a grandchild, he would have to take us all to Hawaii.  He agreed.

Shortly after finding out we were expecting, we went to my parent's house with video camera running and handed my parents Hawaiian leis.  They didn't get it, at least at first.  Then the light went off.  There was much screaming, yelling, crying, hugging, etc.; they were really excited.  But we never did get our Hawaiian vacation.  I'm going to have to ask my dad about that.  Later, that November, we gave the whole family the first grandchild of her generation on both sides of the family, as Melody, my beautiful daughter, was born. 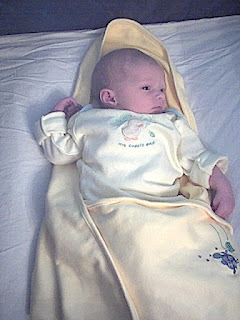 I just checked our bedrooms and they are plenty cool tonight!  I'm excited to sleep in cool comfort in my own bed after a month either without AC, in hotel rooms, or in my parent's guest room.  Just in time, too, as the summer temperatures really start to impact us with 90 degree days coming.  And while this has been anything but simple, I can't help but think that it's the simple things that make life so much more manageable.