Having crushes on celebrities is a fun exercise, but nothing good comes of them.  There is zero chance of ever moving to a relationship of any kind with the object of your obsession, and if the celebrity knows you even exist, it is probably as a result of a restraining order of some kind prohibiting you from being within 1200 miles of the celebrity.  But it's certainly fun to fantasize about them!  And I've had my share of them.

I and several hundred thousand other guys can probably call Sandra Bullock their perfect celebrity fantasy woman.  I first discovered her in a movie called LOVE POTION NO. 9.  I thought, after she went through her transformation in the movie, she was gorgeous.  I hadn't seen her in anything else before then, but I started looking for her in other movies.

THE VANISHING was the next movie I saw her in, though I was very disappointed that she only appeared in a very small part.  But, again, she was gorgeous, and she quickly became my "ideal" in looks.  I was dating someone rather seriously at the time, though, and could easily separate reality from fantasy...Sandra was the one for me!

Sandra had become a leading lady, but super stardom came in her next big movie, SPEED.  Then came WHILE YOU WERE SLEEPING, where I completely fell in love with her.  It didn't last long, though.

I entered into another serious relationship, which kind of ended my relationship with Sandra.  Oh, I still enthusiastically followed her career, but I realized that she was well out of my league by this time.  She was a superstar.  I was, alas, only a fan.

Soon I got married and enjoyed the best relationship with anyone I've ever had.  My hopes for the future were dashed several years later after my wife suddenly and unexpectedly passed away.

It was several years before my crush was re-established, and I began to follow Sandra in earnest once again.  However, she became unreachable when she got married.  I was heartbroken, but happy for her.  She deserved her happiness, even if no one could understand her attraction to that guy.  It was to no one's surprise, though, that the marriage ended after he entered into an illicit affair.  Sandra was a single woman again! 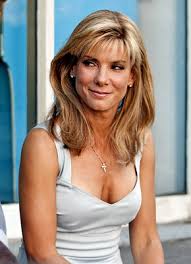 And now, even though she was only a crush, the reality of a relationship with the gorgeous Sandra Bullock is within reach...!


So....how about it, Sandra?  Will you still be my crush?  I still think you're gorgeous!