It's the first day of Summer and the weather is almost perfect. Humidity is relatively low, temps are in the upper 70s/low 80s range, and the sky has nary a cloud to be seen.  So, where am I? In my office having lunch while I type this post on my trusty iPhone, which is a veeeeeery slooooooow process.

I am very fortunate to have a nice, large office with a wonderful view of our unique wave pool, and I found myself watching several people enjoying the setting outside, while their children played. One was a young father sitting with his toddler daughter on his lap, and I found myself thinking about my and my daughter's activities when she was that age. 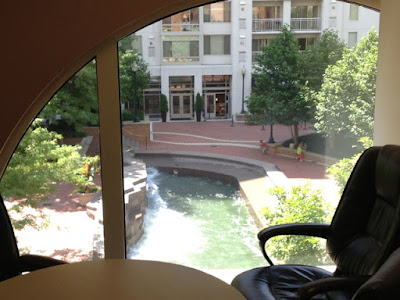 While watching a couple of slightly older kids running around, I began to reminisce about my summers growing up in our Upper Marlboro neighborhood in the late 70s.  There were a lot of kids our age, and we were always doing things together. Mom was one of the neighborhood sitters, and the family next door was another, and, combined, there were eleven of us between the ages of 3 and 9. Everyday was an adventure!

Besides myself (9), the gang consisted of my sister, Angie (7), and brother Darren (4); Jenifer (8), from down the street, who had a crush on me; Michelle (8), from around the corner, who I had a crush on; Kim B. (8), from across the street, was kind of a loner, but reluctantly joined us since she didn't have anything better to do; Kim P. (7), from next door, who we reluctantly allowed to join us since we had to; her sister, Gaylen (3), the youngest of the group; Milton (9), my best friend from around the corner, and his sister, Alicia (8), who was always my "girl next door"; and Krista (8), who lived a few blocks away.  In addition, we were sometimes joined by Carmellio (8), from across the street, especially when we were playing backyard basketball, whiffleball, tackle football, or murderball. He was a big kid and dominated most of our sports.

We had so much fun together, all summer long.  Milton and I had large matchbox car collections, so we always built well defined "cities" in our backyard, and we would play for hours, creating "car accidents" and chases and great stuff like that.  The girls were always playing things like "Charlie's Angels".  I usually got drafted into playing Bosley, which I didn't mind too much, since Michelle played Jill and we always seemed to get tied up together (literally, with rope and all...in fact, we were always getting captured by the "bad guys"). My poor brother, who never wanted to be left out, and since there were no other guys from the show, had to play Sabrina, and was forced to don a skirt for the role.  Fun times, indeed!

I miss those innocent days.  It really was a great time, and the summers seemed like they lasted forever.  To be a kid again....
Posted by Eric Freed at 12:42 PM