I haven't eaten at KFC since they were still known as Kentucky Fried Chicken.  Actually, it hasn't been that long.  My daughter and I traveled through Kentucky a few years ago and stopped at the original KFC, which was kind of cool because of the attached museum, but not for the food.  But KFC has been running an ad for their "Festive Feast", which includes 8 pieces of chicken, 4 biscuits, 2 large side items, and a dozen chocolate chip cookies for $19.99.  I saw the commercial at just the right time.  I was hungry.  I decided that this deal might make a pretty good meal for us.  What?  Okay, maybe not "good", but delicious! 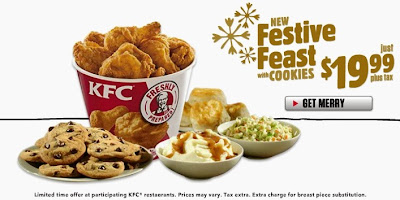 Right after work, I rushed home intending to make a quick stop at the KFC on US 1 in Laurel, before picking up my daughter at school.  I regretted it as soon as I saw there were only 4 people working at the restaurant.  The fact that it was between meals, long after lunch but not quite dinner time, led me to believe I could get in and out quickly.  There were a few customers already waiting and things didn't look promising.

I put in my order and was given my receipt.  And I waited.  After ten minutes, all of the customers in the restaurant were still waiting for their food.  One of the employees came over to all of us and asked for our receipts.  For whatever reason, another employee seemed to put a rush on my particular order, and I received my bag of goodies first.  I was in a rush at this point since my daughter was getting out of school at any minute.  I did a quick inventory and saw that one of the most important items was missing:  the dozen chocolate chip cookies!  I really get frustrated when this happens, and it seems to happen a lot, at many different places.  I rushed back into the restaurant and after getting an employee's attention (thank goodness she recognized me as a customer who had just left), explained that I hadn't received my cookies.  I'm glad I still had my receipt.  The employee said, very matter-of-factly, that they didn't have enough cookies made.  It was going to take 15 minutes to make another batch.  It was clear that they intentionally left my cookies out of my order hoping I wouldn't catch it until later and wouldn't want to come back.  This really bothered me.  They tried to get me to accept another dessert instead, but a big part of my desire to stop at KFC was for those hot-baked chocolate chip cookies.  I said no thanks, I really just want the cookies.  She looked at me as if this was all my fault.  I was getting angry. 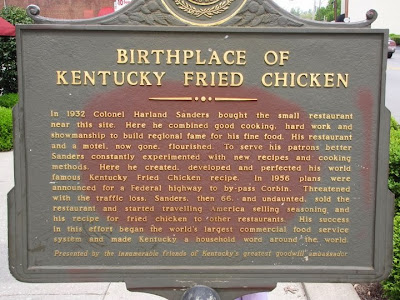 I finally said, if they would get the cookies made, I'd come back in 15 minutes after picking up my daughter, who I was already late picking up because they had taken too long.  They were relieved, and said that would be fine.  So I rushed out, drove home, picked up my girl, and came right back to the KFC.  As promised, the cookies were ready, but a new shift had begun and there were a bunch of new employees working in the restaurant.  I still had my receipt, and one woman, who remembered us, said she would get the cookies for us.  I think having my daughter with me kept everyone's mood light.  We were given our cookies and sent on our way.  My daughter wanted to try a cookie right away, so I let her have one.  She opened the box and there were significantly more than a dozen cookies in the box.  They were nice enough to throw some extras in for us for our inconvenience.  I was pleased, and happy that they made things right. 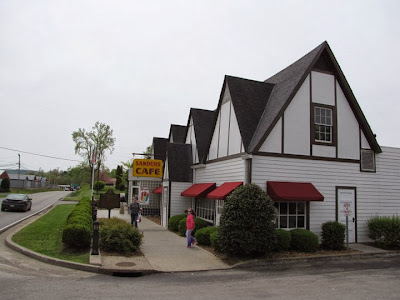 Dinner was really good.  We got the "boneless" recipe, which is all white meat.  It was great!  The mashed potatoes were just as I remembered them, and the gravy made a delicious "dipping sauce" for the chicken and biscuits.  I also got my girl some mac and cheese.  We really enjoyed it.  I'm glad I stopped, though it's not going to be a regular meal for us.  It's just a little too rich.  But it was good. 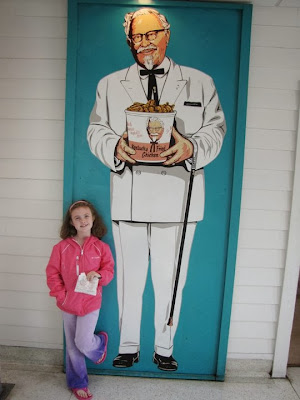