Even though the weather doesn't look or feel like Christmas, it is definitely here!  The most wonderful time of the year, as the song goes.  And now the mad rush begins.  I was taking inventory of bought Christmas presents, and it appears I am lacking a few gifts for several of my family members, so now we begin shopping for specifics rather than for whatever we find.  Tomorrow will be our last-minute shopping day.  Look out, crowds!

You can also tell it's Christmas by the number of parties that are planned.  We had a big party at work today, which was nice.  The next party will be on Sunday evening, which will be with the extended family (in-laws).  Then we have another party on Christmas Eve with all of the families, followed by my immediate family celebrating on Christmas morning.  It's a blast!

Another indicator of Christmas coming soon is the annual Santa visit with the local fire department.  They came down our neighborhood street this evening with sirens blaring and lights blazing, with Santa riding on the back of one of the fire engines.  It was very exciting, however it was a bit surprising that they came through so late at night... it was 9:45 p.m., and I know for a fact that several of the younger kids on our street were asleep already, so they missed seeing ol' Santa.  It was fun to see, though. 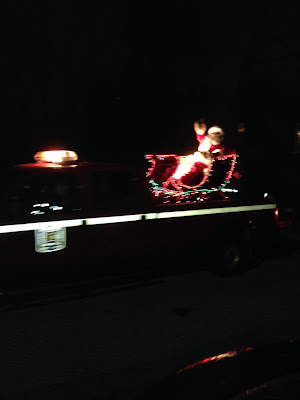 This is our favorite time of year, and it really feels like Christmas is here.  Hitting the stores and fighting the crowds will just emphasize it.

Every year, we go out to Triadelphia Farm to cut down a Christmas Tree.  We've been doing this annually, give or take a couple of years, for the past 15 Christmases.  This year, because of how late in the season Thanksgiving came, plus the poor weather right after that, we didn't get out as early as we wanted to get a tree.  As we've gotten closer to Christmas, the less desire I had to go out and cut one down.  I've had a lot of bad luck with my trees over the years, from them drying out, to our praying mantis fiasco last year.

Last year, we cut down a tree and had it up and decorated in our dining room.  After a few weeks, we noticed a few tiny praying mantises in our kitchen.  Then we saw a LOT of them.  They were everywhere!  I don't know if it's true or not, but I've been told never to kill a praying mantis, that they're endangered or something.  So I was very careful not to hurt them.  But I couldn't just let them wander around the house.  I also wasn't sure how they got in the house to begin with....until I examined our Christmas Tree.  Sure enough, near the base of the trunk, we found the nest.  Apparently, they were hibernating, but once the tree was inside where it was warm, they "hatched" and started looking for food.  It certainly was a memorable Christmas.  I was still finding the little buggers around the kitchen well into the Spring.

So, anyway, we decided not to get a live tree this year.  My daughter was disappointed, and I've run the risk of being called a Scrooge, but it's going to make my Christmas a little easier.  And I promised my daughter we'll put up a small artificial tree.  And given how much I dislike artificial trees, I hope this is the last time, too.

Tomorrow night will be our wrapping party.  My daughter asks every year if she can wrap some presents, and each year, I tell her that she should let me do it.  Well this year I'm letting her have her wish.  She will be wrapping gifts.  It typically takes me an entire day to wrap everything, and this year I don't have Christmas Eve as a day off from work.  So her help is appreciated.  I'm just wondering how long it will take her to say she's finished.  It gets old very quickly.
Posted by Eric Freed at 10:33 PM