Santa has asked me on several occasions to fill in for him.  It helps that I have a union suit and a fairly realistic beard and wig.  It's a fun gig.  I've served in the role at a few different churches I've attended, a few family Christmas parties, at the office, and for my aunt, a story I've shared on this blog.

Having the costume is helpful in other ways, too.  One night, several years back, the University of Maryland Terrapins were playing a Thursday night football game that was to be nationally broadcast on ESPN.  A few friends and I got tickets for the game.  That morning, it had snowed, and by game time, it was well below freezing.  I decided to wear the Santa suit to the game thinking that I might end up getting on TV.  Everyone loves seeing Santa at a football game.  We arrived at Byrd Stadium for the game and realized that ice had collected on the concrete on the stairs of the upper deck, where our seats were located.  We were sitting pretty high up, which was bad enough with my fear of falling, but the ice made me fear that I could actually fall.  I had hoped to be on TV, but now I was afraid I might slip and fall, and the sight of Santa rolling down from the upper deck of the stadium might make the evening news.  It was so cold, and the wind was blowing very hard, so we decided to leave at halftime.  I recorded the game, and checking the tape later, I saw that I never got on the air.

Having a Santa suit gave me a great idea for a Halloween costume one year.  I went as Santa Claus!  I actually had a lot of fun, and Santa was the hit of the party.  I found it kind of easy to just fall into the role, and my normal introvertedness took a back seat to Santa being the life of the party.  I also found out that several young ladies at the party had a "thing" for Santa.  While that meant plenty of them wanted to sit on Santa's lap and tell him what they wanted for Christmas, none of them actually wanted to sit under the tree with Santa and watch the twinkling stars in the night sky.  Oh, well....the beard wasn't exactly conducive for making out.  It covered up too much of my face and lips.

I've had a few gigs that required me to arrive in character, which meant wearing the suit to the location.  It is a blast to be driving down the Beltway dressed as Santa and waving to little kids in the cars I passed.  The looks I got were priceless.

Playing Santa is a lot of fun.  The best was being Santa for my little girl, though.  When she was a baby, it made getting pictures with Santa very easy... 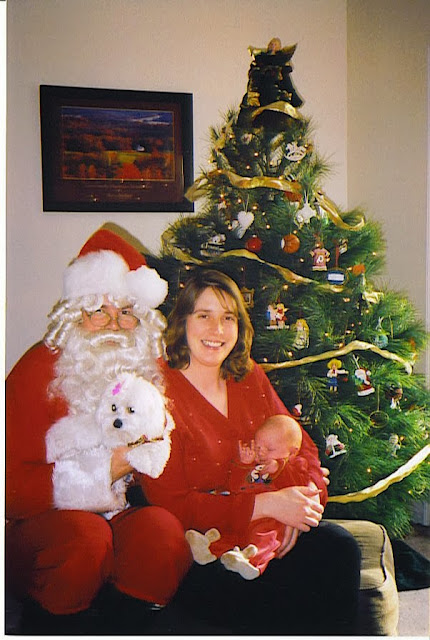