I love snow days!  This was a great day, with lots of snow, and schools were closed, and the Federal Government shut down...  It turned into a fun day.  Once I found out the government was closed, I got a few extra hours of sleep.  I decided to get out of bed at 8:30.  There was no snow outside at all, and I was concerned about the public perception of the government closing for no reason.

I watched the morning news and ate some breakfast.  I had a few things recorded on the Tivo to watch, but, while doing my morning reading of the blogs, I came across Mark Evanier's blog about the new Criterion DVD of IT'S A MAD MAD MAD MAD WORLD, #17 on my list of favorite movies.  It was due to be released today.  I had already pre-purchased it from Amazon several weeks ago, and sort of forgot about it.  I looked up the tracking number and it said it was delivered.  So I went to the front door, and there it was!  Hot dog!  Now I knew what I'd be doing today! 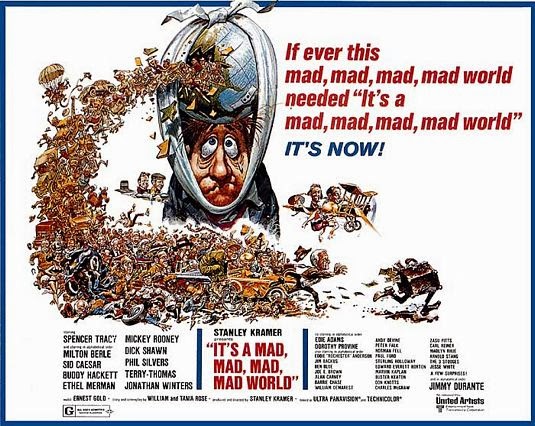 The snow arrived about an hour or so later, and it came down fast.  I decided that I had better go to the store and get a few supplies, since we really didn't have much in the house after being away all weekend.  The grocery store was much more crowded than I imagined.  I figured everything was pretty much shut down, but the store was hopping.  I got what I needed and headed home.

I popped in the DVD and watched MAD WORLD.  I've seen this movie dozens of times, but this edition is the most complete since it was first released in 1963.  Directed by Stanley Kramer, the movie is a comedic tour de force, starring a who's who of comedy stars over entertainment history.  And aside from the stars, it had cameos from just about every other comedian in Hollywood at the time.  Spencer Tracy was the main star, and the only actor in the movie without a comedy background.  Other stars include Milton Berle, Sid Caesar, Buddy Hackett, Ethel Merman, Mickey Rooney, Dick Shawn, Phil Silvers, Terry-Thomas, and Jonathan Winters.  Others with cameos include Jack Benny, Jimmy Durante, Peter Falk, Eddie "Rochester" Anderson, Stan Freburg, Buster Keaton, Don Knotts, Jerry Lewis, Carl Reiner, and The Three Stooges.

When it was released, it clocked in at 202 minutes.  It was trimmed down substantially shortly after, and much of the cut footage had disappeared.  This edition of the movie includes much of this missing footage, and it was a lot of fun to see.  I first saw the movie when I was a kid, and it I really enjoyed it.  It obviously made an impression on me.  The story is about a guy who committed a robbery many years ago, and he crashes his car way out in the desert of Southern California.  A group of strangers witness the crash, and talk to the guy, played by Jimmy Durante, just before he dies.  He tells them about all this money that's buried under a "big 'W'".  The police show up, but the strangers decided not to say anything about the money to the police.  Soon, however, they decide it might be for real, and it becomes a race to get to the money first.  What ensues is craziness, as all of the characters make their way to where the money is supposedly buried, with the cops all monitoring them.  While there is a lot of slapstick, the movie is hilarious because of the comedy genius of the stars.  It's awesome!

The movie's length adds to the epic feel.  The Criterion edition is well worth the price, and I highly recommend it.  Check it out if you get the chance.

Enjoy the snow!  Have a great evening, everyone!