Do you know that feeling when you connect with someone?  I mean, REALLY connect, where you can talk about anything, and you come away from the conversation unable to forget the person you were connecting with?  It doesn't happen very often for me, but when it does, it feels really good and fills me with confidence.  And I look forward to the next opportunity to talk to that person. 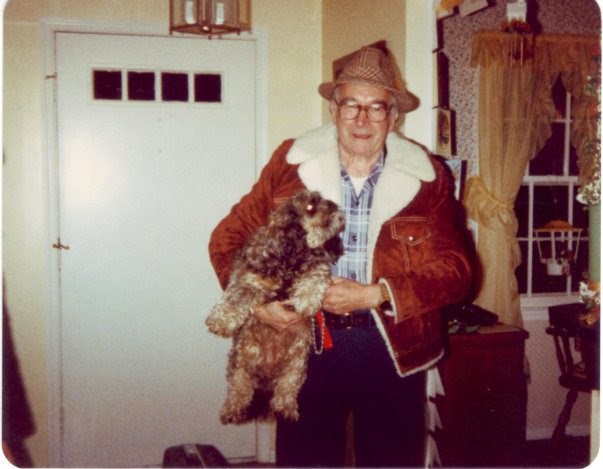 I felt that way about my grandfather, Chester "Pap" Freed, who was one of the greatest men I ever met.  A true mentor in action and words, I cherish every memory of my time with him.  He lived in Pennsylvania, in my father's hometown of Uniontown, so I didn't get to see him regularly, unless you call every other month, or more, "regularly".  He was a Christ-follower, and he shared his faith in the way he lived his life.  He was such a gentle soul, and he was filled with the wisdom of a hard life.  But he never let it get him down.  He was a positive person.  He took care of his family as best as he could.  He worked in the coal mines, and developed Black Lung as a result.  After his partner in the mine (everyone was paired up for safety) was killed in a cave in, he came out of the experience shaken and he quit that job.  He then worked three jobs to care for his family.  He was a night watchman at the Methodist Camp at Jumonville, up in the mountains overlooking Uniontown.  He opened a barber shop in the basement of their large home in the little town of Hopwood.  And he was a lay preacher and circuit rider at Hopwood Methodist Church, and two other churches up in the mountains.

What I remember best were those times when our family would visit Pap and Grandma, and Pap would make his homemade peanut butter fudge.  I was his shadow much of the time we were there.  When he was cutting hair in the barbershop, I wanted to hang out down there, just to listen to the conversation, with the smell of talcum powder and shaving cream in the air.  Pap would give me a dime and I'd get a strawberry soda out of the vending machine in the corner of the shop, and, if he had a few minutes, he would trim up my hair and reward me with a lollipop.  Since he and Grandma slept in separate rooms (I think because Pap snored so loudly), I was honored to sleep in his room.  He would awake at the crack of dawn, get dressed, and wander down to the basement to shovel coal into the old furnace.  I followed him, trying not to let him know I was there, and would watch him.  Then he would put on a pair of rubber boots, if it had been raining, and sweep water out of his flooded barber shop and into the drain just outside the door.  He worked really hard.  Then he would make breakfast for everyone (almost always pancakes and bacon).

Later in life, when he was older and I was old enough to make the trip by myself, I tried to visit him whenever I could.  I would drive up after work on a Friday and spend the weekend with him.  He and I would chat for hours.  He was full of advice, particularly about women.  He told me that one of the greatest joys in life was the pursuit of a woman.  I never forgot that.  On those trips, all I needed was a sleeping bag, and I would sleep on the floor in his living room.  He would get up early, just like before, open the front door and go out to get his morning paper, then he'd turn on his AM radio and sit at the kitchen table reading the news.  He made as much noise as possible, because I think he wanted me to wake up and make him breakfast.  Since I was up, I always complied.  It was the least I could do for him.

He battled cancer a couple of times, and the chemotherapy wore him down, but he pulled through the first time.  The second time, it was too much, and he got weaker and weaker.  I continued to see him as often as I could, as did the rest of the family (my father was one of eight siblings, so there were a lot of us).  We had a hospital bed moved into his bedroom so he would be able to live out his days at home.  A nurse took care of his needs.  On that final morning, after several days of him appearing comatose, the nurse awoke us before dawn to let us know this was it.  We gathered around his bed, praying and telling him it was okay to let go.  I held his hand.  All of sudden, his eyes opened up and he just stared at the ceiling for at least 30 seconds, before his eyes slowly closed and he breathed his last.  I believe he was seeing Jesus coming for him.  He died on his birthday at the age of 83.

I've told Pap's story on this blog before, but I was thinking about him today and the words just came to me along with the memories.  He was a great man.  I can't wait to connect with him again someday.

Thanks!  Have a great evening, everyone!