Happy birthday, America!  Yesterday was a beautiful day, and my daughter, Melody, and I decided to get out and enjoy it.  We spent part of the day up at Arundel Mills, where we got a few necessities and I was able to use a birthday giftcard at Bass Pro Shop, where I got a new watch and some socks, plus we got a new pair of sneakers for Melody.  We had fun, since that's a fun store to walk around in.  Lunch at DuClaw is always great, too, since it's never busy (how do they stay in business???).  Melody tried the French dip (her first cheesesteak), and I had a quartet of sliders, which is a new item on the menu (at least to me...we haven't been to DuClaw in at least a year).  I had a crabcake, sausage, pulled chicken barbecue, and duck.  They were all great and unique.  The crabcake was the most ordinary.  The sausage was spicy.  The duck was the best of the bunch.  Our server mentioned the Ahi Tuna being his favorite, so I'll have to try it next time.  I also had eggplant fries, and they were awesome!

We stopped by the house before heading back out for fireworks over at the Lakefront in Columbia, MD.  It was really crowded and I regretted going over so late in the evening.  It was about 7:30, and the only parking available was over near the lower entrance to Sears.  We found a space to park and I made a mental note that this would be a good spot to make a quick exit when the fireworks ended.  We walked over to the Lakefront and it became clear just how crowded it was.  There were probably thousands of people there.  There was entertainment on a stage, and a bunch of food trucks. 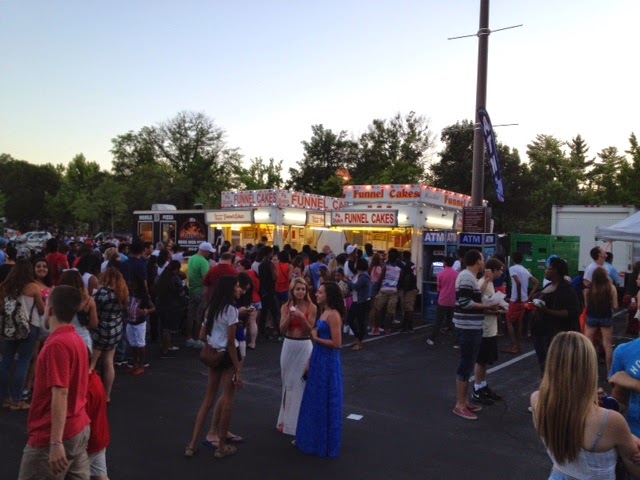 We were hungry, since we hadn't had dinner yet, so we got in line at one of the food trucks, behind at least a hundred people.  The line moved fairly well, and within 20 minutes, we had gotten over half the length of the line closer.  We kept moving up, and then I noticed a group of about five teen boys who had gathered just ahead of us.  They weren't in line, but they just kind of hung around the line, talking among themselves.  The line would move forward and we would pass them, then they would move up right next to the line.  They were clearly not with anyone else ahead of us in line.  We got to within about a dozen people of the front of the line, where you place your food order, and I finally said something to the boys.  "Hey, you guys know that the end of the line is way back there, right?"  They all looked at me, then turned back to themselves and continued to chat, totally ignoring me.  I didn't care for the way they acted towards me, and I was feeling ornery enough to say something to them again.  "You guys know there are a lot of people in line that have waited a long time."  They turned to me again, and started laughing among themselves.  One said that they were with the people further up in line, but it was clear they were not.  It they were, they would be in line with them.  Instead, they were directly in front of me.  Not liking this response, either, I said, "It must be nice to not have to stand in line behind all of these people who have been waiting a lot longer than you have."  They continued to laugh at me.  They were at the counter by this time, and showed no guilt at all about ordering their food out of turn.  I then said, quite loudly, "America sure is a great country when you can do anything you want without any ramifications, even if you cheat."  They laughed again, and when the final kid got his food and started walking away, he turned to me and said, "Happy Fourth!"  Their boldness and defiance shocked me.  I thought I had embarrassed and brought enough attention to them that they might just disappear, but I guess being in a group gave them more confidence.  I was disappointed, but I'm convinced this was an isolated incident.  I've worked with teens most of my life, and I'm not about to condemn all kids by stating that they all act this way.

I decided not to let what happened bother me, and we continued to enjoy the festivities.  It was really crowded, though, and we decided to trek back to our Jeep and watch the fireworks there.  I have to say that the crowds were very orderly and everyone seemed to be enjoying themselves.  We had the top off the Jeep and it was almost chilly with the cool breeze blowing, a remnant of Hurricane Arthur.  However, we waited and waited for the fireworks, and they still weren't starting.  I kept checking Twitter to see if something was wrong, but only saw the same questions.  Everyone was wondering why the fireworks hadn't started.  We were exchanging text messages with my parents, too, and they said the fireworks on the National Mall had already ended, and we were still waiting for the ones in Columbia to start.  Melody was getting restless.  I kept trying to decide whether we should just go on home, anticipating the traffic we might encounter once they ended, assuming they were even going to start.  Then, with a loud boom, the first fireworks exploded into the sky.  It was 10 p.m. 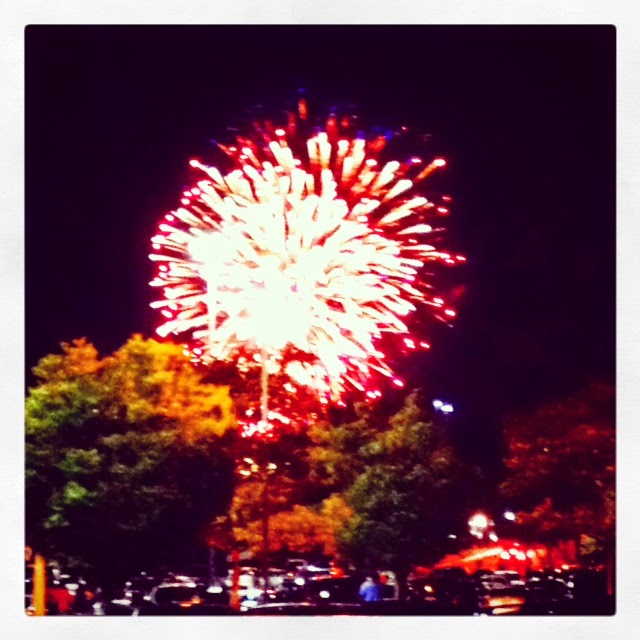 The fireworks were great.  It was a neat show.  But I noticed more and more cars beginning to head out of the parking lot, and lines of cars were already backed up into the lot.  As the big finish began to fly into the sky, I pulled out of our space and thus began our long wait to exit the parking lot.  Nobody could move.  I could see from where we were that no one was moving all the way over to Broken Land Parkway.  Every once in a while, a handful of cars would pull up, but then they would stop and no one moved.  After 30 minutes, we had only moved about 30 feet from where we had been parked.  Tempers flared, and patience was tossed aside, and horns began honking.  I had decided that the quickest way out was to exit onto Little Patuxent, turning left, then turn right past Toby's and exit onto 29 south.  Frustrated people would not let cars out in front of them, though, even if they were going in the opposite direction and weren't moving.  Our civil county wasn't acting very civil.  Finally, traffic moved enough that we were able to get out of the parking lot.  Frankly, I couldn't figure out why it had been so hard to get the congested parking lot cleared out given how easy traffic moved once we exited the Mall.  We got home at midnight. 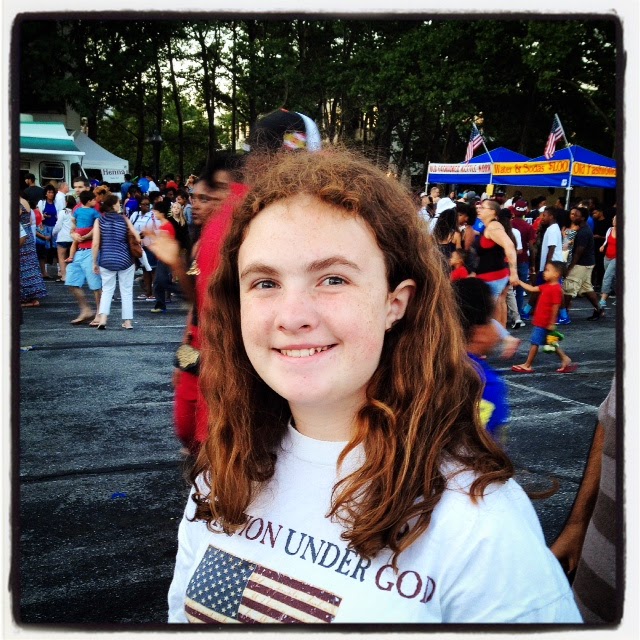 While we drove home, Melody and I talked about our day, and we concluded it really was a great day.  The good always far outshines the bad, and I'm glad to live in such a great country.  Happy birthday, America!  May the wings of Liberty never lose a feather!