Friday Night At The Drive-in 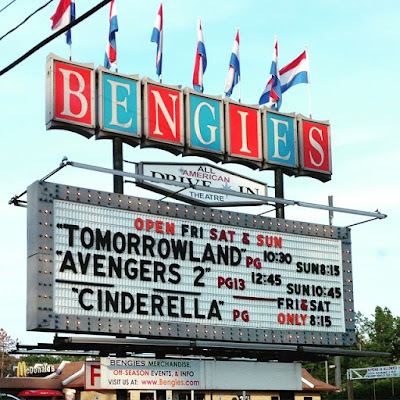 My beautiful daughter and I attended the showings at the Bengies Drive-In in Middle River, MD, on Friday night.  We saw CINDERELLA, TOMORROWLAND, and the first 40 minutes or so of AVENGERS:  AGE OF ULTRON (it was ridiculously late and we had already seen AVENGERS last weekend).  It was a beautiful if somewhat warm evening (for May), and the lineup was pretty good, so we had a great time.

Melody, my daughter, saw CINDERELLA a while ago, when she spent some time with her grandmother, and she told me it was good.  It was a live-action update of the Disney classic.  It was good, but it also struck me as such a sad movie.  While it had a happy ending, poor "Cinder" Ella had a very difficult life.

Ella seemed to have a joyous childhood with two parents who loved and adored her.  But very soon, we watch her mother die due to an illness, and there is immense sadness.  It struck me more given the fact that my daughter lost her mother when she was a baby, and though Melody never really knew her mom, I know only too well what a difficult loss it was.  It gets worse, though.  Ella's father, who is trying to find love again, asks his daughter for her blessing to pursue a new relationship, and soon they are sharing a house with a woman who appears nice enough, and her two spoiled brat daughters.  They don't seem to appreciate how generous and loving Ella and her father are to them, and while they certainly liven up the place, their lifestyle is much different, with wild parties and gambling the new norm.

Ella's father has to leave on business which will take him away for several months, and Ella is very sad to see him go.  She begins to feel the full brunt of the invasion of her stepmother and stepdaughters on her life, without her father there to take the lead of tempering their rude behavior.  Soon, news arrives that Ella's father was stricken by illness while traveling and he, too, passes away.  This is devastating news to Ella.  It struck me, too, as this has been my greatest fear for my daughter since my wife died:  that should I die, it would leave her without both of her parents.  Watching Ella deal with the increasing rudeness of the people she's left with only emphasizing the loneliness Ella feels, and fueled my fear.  This could be my daughter's future!

Now, I'm not married, but I dated a young lady very seriously several years ago, and we talked about marriage.  One of the issues I had with this woman was how she behaved towards my daughter.  She had never been a mother, and she didn't know how to deal with children, which is more obvious in hindsight, but even then became apparent the longer she was around Melody.  The relationship ended, and not well, marking the worst breakup I'd ever experienced (aside from my wife's death), but I can't help thinking that, if the relationship had progressed to marriage, and this woman had become Melody's stepmother, and something then happened to me, what kind of relationship might they have had?  If it was anything like this movie, it would be tragic.

In the movie, it didn't matter how nice and loving and giving Ella was towards her step family, they continued to treat her worse and worse, ridiculing her and reducing her to a servant role and stealing her happiness any chance they could, even banishing her to the attic of their huge, drafty house.

Redemption comes in the form of Ella's fairy godmother, but that's hardly reality.  Love wins out in the end, and Ella even does the right thing by forgiving her stepmother, something I didn't expect, but, given the goodness and love exhibited by Ella throughout the movie, wasn't a surprise.

I enjoyed the movie more than I expected.  I actually thought I might grab a short catnap during the opening movie to help me stay awake for THE AVENGERS, but I was enjoying it too much, and, overall, it ended up being better that we left when we did, which was less than halfway through the Avengers movie.  Fortunately, we already saw it.  We arrived home at around 2:30 a.m., and went straight to sleep.  I didn't wake up until 11:30 Saturday morning!

TOMORROWLAND was a good movie, as well, and nothing like what I expected.  It may be too intense for really young kids.  I was surprised by the amount of violence, and the life-and-death situations, which previews didn't really hint at, but, overall, we enjoyed it.  And AVENGERS is awesome.  Though it wasn't as great as the first Avengers movie, this was certainly exciting and exceeded my expectations.

Enjoy the rest of your weekend, everyone!