Reclining at the Movies

My daughter and I went to the movies last night and it turned into a neat, memorable experience.  We went to the "new" Laurel Towne Centre, which has a multiplex movie theater.  The theater has a cool feature that you might say is about time:  reclining seats!  Watching a movie here was like sitting in my living room.

Our plan was to see the new AVENGERS: AGE OF ULTRON movie.  Even though the movie has been out for almost a month, I wasn't sure how crowded it might be, especially since it was a Friday night.  I ordered tickets through Fandango.com, and discovered that the Regal movie theater has reserved seating.  I'm not sure I like the direction theaters are going with this.  While I can certainly see the benefits of having a reserved seat, especially if it's for a new release and crowds are expected, I like the freedom of going into a theater and scoping out where the best seats are given where other folks might already be sitting.  Since I didn't know what this theater looked like, I also was hesitant about choosing seats that might not be the best in relation to the screen.  That said, I elected to reserve the seats, since it appeared that there were a number of seats already reserved by others.

We arrived at the theater early, about 30 minutes before the movie was due to start.  Theater #3, where our movie was playing, was empty, so we were able to explore a little bit.  There were more seats than the Fandango app showed, so it appears that there are only a limited number of seats available for reservations, leaving the rest for walk-ups, I'm guessing.  Our seats, in Row B, were right in the center of the row, but the seats were all much too close to the screen.  The rows are spread out purposely to allow for the recliners to open up and still allow folks to walk through the aisles. 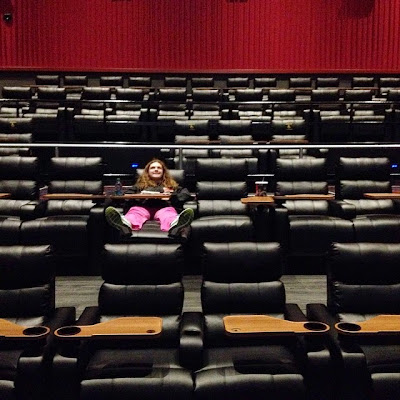 Once seated, we could tell that we were too close to the screen, and I started to regret reserving the seats in advance (though I guess it really wouldn't have mattered -- I had no way of knowing until I was in the theater).  I'll know for the future, though.  The recliners are really comfortable.  They are powered, and as the footrest lifts, the back begins to recline slightly, which made it a little bit easier to see the entire screen.  Even reclined, though, Row B is still too close, and I found it hard to see the entire screen.  There are only about five rows total, though so you're really limited as to where you can sit.  I'd say there were about 60 or so total seats in the theater.  It's possible that there are larger individual theaters for first-run movies.  Each seat has a built-in swinging table-top, which you can move to suit your comfort, and a cup holder.  Seats are paired up, such that there are larger gaps between every other seat, and, if you're there with someone, you can sit a little closer if you so choose (and your "date" doesn't mind...or smell). 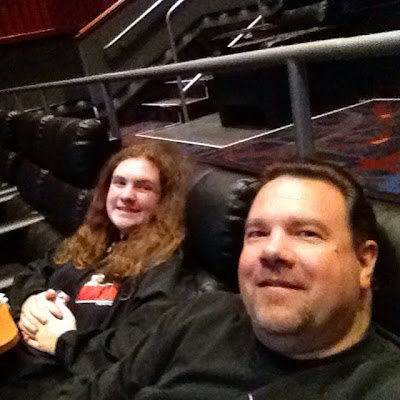 The Avengers movie is really good.  Being a bit of a comic book geek and Avengers fan growing up, I loved it.  It picks up pretty much where the first movie left off, and the relationships between the characters have evolved nicely.  Ultron, the villain, played menacingly by James Spader, is eerie and powerful, a worthy adversary for the heroes.  The newer characters fit in well, and there are a few surprises, too.  The Avengers comic book is all about change, with a constantly changing membership, and the movies (with two sequels planned) follow suit, as it appears we'll have a slightly changed lineup for the next movie.  There's also a nice tie-in with the Guardians of the Galaxy movie from last Summer. 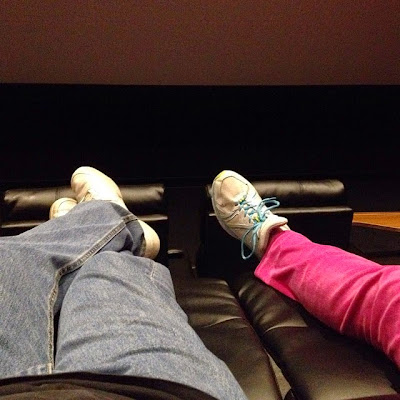 Anyway, Friday Date Night was a lot of fun, and the new Regal Theater at the Laurel Towne Centre is a neat experience, if only for the recliners.  Just don't sit so close to the screen.