My daughter is very brave, in my eyes.  I was such an introverted kid, and to watch Melody, as shy as she is at times, volunteer on her own, without any pressure from me or anyone else in the family, to sing in the school variety show, on stage in front of hundreds of people, just blows me away!  But she did.  She likes to sing.  I listen to her sing every time she gets in the shower (doesn't everyone?), and she is pretty good.  She sings on pitch, and shows an aptitude for music.  She's addicted to Radio Disney, but she also has an appreciation for 50s, 60s, 70s, and 80s rock (though I might be the reason for that).  She sings with the praise team at her grandparent's church whenever the opportunity presents itself.  She has talent.  A real gift from God.

Last year, when her school began advertising for the annual variety show, Melody was convinced she wanted to try out.  As the time came for tryouts, she changed her mind and decided not to do it.  I didn't pressure her, and I just let it go.  This year was different.  She was set on trying out, and we went so far as to download the song she wanted to sing, BRAVE, by Sara Bareilles.  She didn't practice much, but she knew all of the words, and so she tried out on warm day a few weeks ago.  I watched her get up in front of a bunch of her classmates and several PTA members and teachers, and she sang...so quietly I could barely hear her.  But she was good enough to make the cut for the variety show.  She was so excited.  So was I. 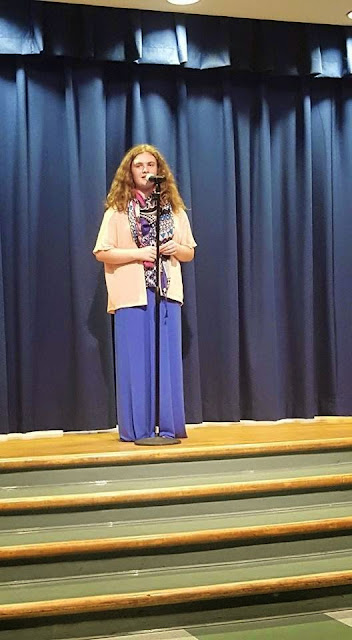 The show was Wednesday night.  She was a nervous wreck.  She looked beautiful.  We had gone shopping for clothes, something we both hate doing with a passion, and got a nice long royal blue skirt, a pink, blue, white and black blouse, and matching scarf, along with a nice pink sweater.  She looked too adult-like for my tastes, but she was gorgeous.  She had a nice warm-up show earlier in the day in front of her classmates, which I'm sure was nervous for her in a different way.  She was scheduled to perform fourth out of forty acts.  That was good, because she would be able to get it done early and not worry about it.  My parents and my in-laws joined me in the audience, along with my sister.  I was feeling nervous for her, while knowing at the same time that she would be great.  The show started at 7.  She went out fourth, as planned...

And she was awesome!  She did such a great job!  We were all so happy for her.  She was noticeably nervous, but her voice was clear and loud and wonderful.  And she knew it when she finished.  We applauded for her, and later, the principal told her she surely had the biggest support contingent.  Then we had to sit through 36 more acts.

It was a great show, and I was really proud of my girl.  She was brave, just like the song.  And I'm so glad that she took that leap.  I pray that she will go through life knowing that she can leap and always land safely, and trust that she will always have my support.  And love.  And God's love for her.

Thank you, Lord, for my little girl!

Have a wonderful weekend, everyone!