The Mighty Sound of Maryland

After going to my old band director's retirement as the Director of Bands at the University of Maryland last weekend, I've been thinking a lot about my days in the Mighty Sound of Maryland Marching Band.  I had played with my high school band, at Frederick Douglass High School in Upper Marlboro, Maryland, and I had a blast.  Music was my thing back then.  I played the clarinet in both the marching band and symphonic band, and alto sax in the jazz band, so I was a committed student.  Coming to the University of Maryland, though, was a bit like MR. SMITH GOES TO WASHINGTON.  I was very unprepared for both the size of the band and the seriousness of the musicianship among the students there.  I was very much a small fish and a big pond. 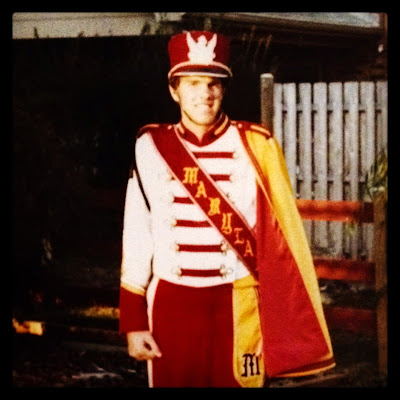 The Mighty Sound has what is called "Early Week," which is a bit like boot camp.  It's an intense week of all-day rehearsals outside and inside, where we learned the pre-game show, the music, and the first few halftime shows for the upcoming football season.  There's a lot of bonding that goes on, as well, as we get to know our fellow band mates.

There are many romances that begin that week, some of which carry forward for the entire season (and sometimes for a lifetime!).  I wish it had worked that way for me (though I realize that God had a plan for me, and I have no regrets).  I had a buddy that first year.  Miss Renee was an oh-so-nice and very cute young clarinet player who was as new to the band as me, and it was fun getting to know her.  We weren't so close that we hung out together, but certainly, we seemed to hit it off well enough.  I was so clueless, though.  I'm pretty sure, if I had only asked, we could have dated, and who knows what may have happened.  But I didn't make a move, and her apparent interest in me, which I only saw in hindsight, quickly went to someone else.

Mr. Sparks could be fairly intimidating, much like an Army Sargent, and he would call people out if you were out of step or at the wrong spot on the field.  He stood at the top of a large tower during rehearsals and could see the entire field, and he used a PA system so everyone could hear him.  It was better if he didn't know your name.  I kept my head down, and I'm sure he didn't know mine.  But he knew my face.  During one intense rehearsal, he was standing down on the field.  We had finished one routine, and I guess we didn't do it quite to his satisfaction.  He said to do the end of the routine again.  We did it again.  He said to do it again, and we did it again.  He was really unhappy about something, and he was actually on the field, but because of the location of the speakers for the PA system, it was hard to know exactly where he was on the field.  He told us to do it again.  So we did it again.  It was at that point I realized that his anger was aimed at me.  He walked right over and stood directly in front of me, giving me one of his cold, icy stares.  He said to do it again.  I broke into a cold sweat.  My knees felt like they were going to buckle.  We did it again.  And then he looked me right the eyes, and he said, "Good man," and he flashed me a very slight grin.  Whew.

After two seasons in the Mighty Sound, I had had enough.  My grades hadn't been very good, and the amount of time I had to devote to the band was interfering on my studies.  I was a commuter student and I had a pretty busy life outside of school, mostly as a youth counselor at my church, and the band just didn't fit in.  It wasn't an easy decision, but it was better for me.  The band rehearsed on the field every Monday, Wednesday, and Friday from 3 to 5 p.m., and inside rehearsals on Thursday evenings from 6:30 to 8:30 p.m., plus games and other events almost every weekend through the Fall season.  It was rough.  If I had lived on campus, it might have been different, but throw in a 30 minute drive to and from campus, which is what I had, and it was a lot.

But, wow, what memories I had of my time with the band.  It was fun and I enjoyed it, overall.  I'm hopeful that my wonderful daughter, should she decide to go to the University of Maryland (or any school, really), that she will decide to play with the band.
Posted by Eric Freed at 9:20 PM