Elation in The City of Champions

Last night's baseball game was about the most exciting game I've watched in a long time.  21 years, to be exact.  The Pittsburgh Pirates, the surprise team this year in Major League Baseball, not only broke their streak of 21 losing seasons this year, but they also returned to the playoffs, securing the wildcard berth for the National League.  After sweeping the Cincinnati Reds to finish the regular season, the Bucs clinched being able to host the game against the Reds.  The Reds made it seem like it wouldn't be a big deal, especially since they would start Pirate-beating pitcher Johnny Cueto, who has dominated the Pirates at their home stadium, PNC Park.  The Pirates started pitcher Francisco Liriano, who dominated lefty hitters like no one else in baseball history.

The crowd was in a frenzy.  Having been to many Steelers football games in Pittsburgh over the years, I know how loud the crowds can be.  But a football crowd at a baseball game is unusual.  And it got even more unusual as the game went on.

The Pirates brought back Doug Drabeck, their former pitcher who last pitched for the Bucs in their last playoff game, the infamous "Sid Bream slide" game that the Atlanta Braves won and sent the Bucs on their 21 year losing streak, to throw out the ceremonial first pitch.  The game got off to a great start by the Bucs, as they were able to get hit after hit off of Cueto.  The crowd got into the act by shouting "Cueeeeeee-tooooooo" over and over, getting under Cueto's skin, and he was obviously frazzled, dropping the baseball at one point while just standing on the pitcher's mound.  He gave up a homerun to Pirate catcher Russell Martin.

The Pirates went on to take a 6-2 lead in the ninth inning, and the Bucs won with the crowd never letting up.  The Reds didn't seem to know what hit them.  The Pirates celebrated in grand style, with champagne flowing all over the locker room.

The Pirates fans were elated.  Being a Pirates fan myself, I was truly happy about their win.  It felt so great!  If there was a "Curse of Sid Bream", and many think there is such a thing, it definitely was exorcised after this game.  My cousin, JJ, told me he was close to crying, he was so happy.  JJ was 4 years old when the Pirates last were in the playoffs.  It was an awesome night. 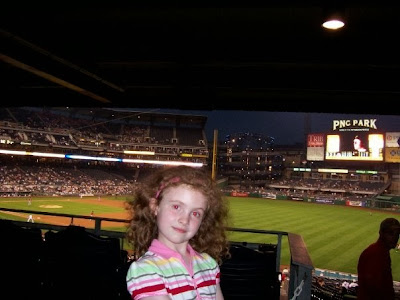