I love dogs!  They are the best pet companion.  Cat lovers can have their cats, but dogs are the only ones who love just being with you, and miss you when you're not with them.  They are fun, unselfish (mostly), dedicated, lovable, and protective.  I've had two in my life.  Faithful Pup Scout has been with me for almost 12 years.  When I was seven, my family was gifted with Ginger.

Ginger was an energetic mutt of a puppy who lived with an old woman about two blocks from my grandparents in Hopwood, PA, where my dad grew up.  We happened to be visiting with them when Ginger, who my grandfather had befriended and who liked to hang out with my grandfather's dog, was at their house.  Ginger was a peek-a-poo terrier, part pekingese, part poodle, and mostly terrier, mixed tan and brown, with a curly tail, and a terrier chin and ears.  When we called her, she would put her ears up, cock her head to the side, and look at us like, "How do you know my name?"  We quickly fell in love with her, and my grandfather, knowing the old woman who owned her couldn't take care of her, negotiated a deal for us to purchase her for $50.  We were dog-owners! 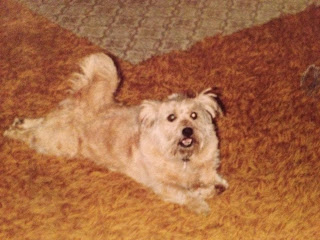 Ginger traveled home with us, and seemed excited the whole way home, which was a four hour trip.  She was SO excited, in fact, that she threw-up just as we pulled into the driveway at home.  Ginger adjusted easily to our family, and she seemed to love being around us kids.  I was seven, sister Angie was five, and brother Darren was two.  I don't think she was too fond of my brother at first.  We have an 8 mm film of Ginger getting smashed by a small piece of plywood by him not too long after she joined us.

Though we tried to be careful about putting Ginger on a leash when we were outside, there were many times when she would follow us out of the house when we didn't notice, and she would wander around the neighborhood.  She wasn't a very big dog, less than 25 pounds, and she seemed to hide pretty well.  When we realized she was missing, it always took us a while to find her, at least when she was still a puppy.  Unfortunately, one particular time she got loose, it altered our lives greatly.

It was one of those times when she got out and we didn't know it.  We went running out of the house, and Ginger chased, slipping out of the slowly closing storm door.  Once outside, Ginger would start wandering.  She wandered next store, and for whatever reason, she decided to hide out under the neighbor's car just before that neighbor decided to start up the car and head out on an errand.  He ran right over Ginger, hearing her yelp immediately, and stopped and jumped out of the car, only to find our severely injured puppy.  He yelled for my father, who happened to be outside doing yard work, and Dad and another neighbor, Pete, ran over to see what was wrong.  Ginger was in bad shape.  Her left front leg was shattered and bleeding, and she was only semi-conscious.  They were able to get her out from under the neighbor's car, and carried her to our family's station wagon.  Dad, Pete, and I, sitting in the back with Ginger, rushed out to a nearby emergency animal hospital.

The doctor examined Ginger and didn't hold out much hope of her surviving.  X-rays showed that the nerves and tendons in her front paw were completely severed, one of her lungs was collapsed, and her heart had moved a few inches.  The doctor gave us some meds, said to monitor her overnight, but that we shouldn't expect her to make it through the night.  If she did, we should continue to monitor her progress and pain tolerance and that would determine her prognosis.  We sadly took her home.  She was completely listless and I was scared she was going to die.

We arrived at home and Mom & Dad decided to have her sleep in the shower in the master bathroom in their bedroom, which would keep her from being able to move around should she get up in the night, and they would check on her throughout the night.  Wouldn't you know it, but the miracle dog survived the night and actually thrived in the days ahead.  She completely lost the use of her leg, but she learned to hop pretty well, and actually learned to run pretty fast despite the injury.  We eventually had her leg amputated from the elbow down, and that helped her mobility quite a bit. 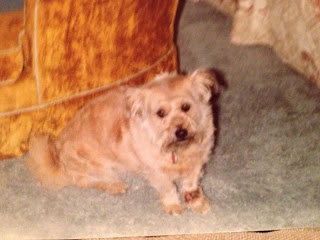 She really became my buddy in the years ahead, and everyone referred to her as my dog.  She went on many trips with the whole family, including many camping trips, and she really seemed to love traveling.  Years later, after I started driving, she would ride with me on road trips.  She slept with me on my bed every night.  She was a great dog.  She started to slow down a lot as she got older.  Her last few years were spent battling my sister's cat, Sam, who joined the family as a kitten when Ginger was about 13.  Sam wanted Ginger to play with him, but Ginger was getting too old to want to deal with that cat. 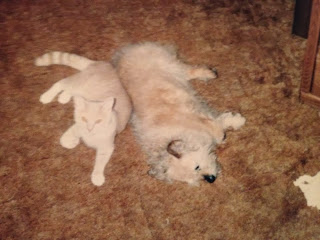 When Ginger was 16, it was apparent that her quality of life had deteriorated to the point where we had to consider putting her down.  I still remember that Saturday morning.  Dad, Darren, Angie, and I piled into the car with Ginger and took her to the vet's office (Mom couldn't go...she was just too sad).  The doctor agreed that it was time, and we gathered around her on the examining table.  I stood right in front of her face, with both of my hands wrapped around her, and I felt her breath her last.  I was 23 years old and I cried like a baby.

Ginger was an awesome dog to grow up with.  I feel honored to have had her as "my" dog.  Studies have shown that dog's brains are similar to those of a young child, and they feel emotions just like people.  I know Ginger loved me as much as I loved her, maybe more.  I don't know if our pets have souls, but I won't be surprised if I see Ginger running towards me on four legs when I enter the gates of Heaven.