It's beginning to look a lot like Winter!  Today's snow had me and my daughter, Melody, very excited.  We love this time of the year, and seeing snow just adds to the atmosphere of the season.  At the first sign of snow falling, Melody began giggling like the school girl she is.  We kept the front door and the curtains open so we could watch it fall.  It really was awesome.

I spent a good bit of the day watching NFL Red Zone, which shows highlights of all of the NFL games as they happen.  When I can't watch my Pittsburgh Steelers play, that's the channel I watch.  Unfortunately, the game didn't go the Steelers' way, and they fell apart at the end.  The loss pretty much ends any chance of them going to the playoffs.  There were a lot of exciting games, however, with many of them going right down to the wire.  The Ravens were successful in a see-saw game which saw four touchdowns in the last few minutes.

Melody was too excited by the snow to just sit inside, and even after it switched over to freezing rain, she was outside sled riding with her friends.  I can only hope that we get a lot more snow this Winter, given how happy it makes my little girl.

Last night we went to our first Christmas party of the season.  My father-in-law is the pastor at First Baptist Church of Damascus, and they had their annual Christmas party, with about 50 or so people attending.  The food was great, which was an improvement on last year's party, when a few dozen people got food poisoning by the caterer.

The emcee for the evening ended up being a big surprise:  Elvis!  One of the church members surprised everyone by coming out of hiding wearing a white jumpsuit and black wig, and he spent the entire evening in character.  We played a bunch of games, ate good food, and enjoyed each others company.  It was the most fun and relaxed I've been in weeks.  My parents and in-laws were both there with us, and Melody seemed to enjoy herself quite a bit. 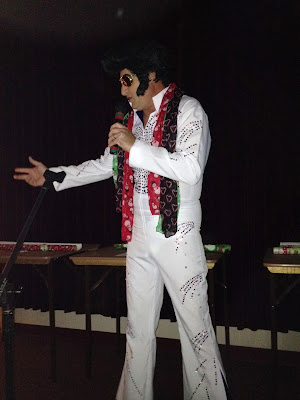 Now that we have a mess outside due to the weather, what's going to happen tomorrow?  The news is reporting another round of significant icing over night, which will make the roads pretty dangerous.  The sidewalks will likely not be shoveled, so that will impact the kids who walk to school.  At the least, I can see the schools being delayed, if not cancelled.  The Federal Government rarely shuts down, but ice is the great equalizer when it comes to traffic.  If it was just snow, that's one thing.  Ice makes it significantly worse.  We won't know for sure until morning, however.

If we get a day off, it means Melody and I will spend the day decorating for Christmas.  I would like to get some of the Christmas lights put up outside, and we need to clear out an area for a tree.  We're already well past the time when we would go out and cut down a tree, so we'll likely just head over to the tree lot that the Savage Fire Dept. hosts each year.  We've had good luck with them in the past.

So we're headed for bed now and we'll see how things look in the morning.  Stay safe, everyone!