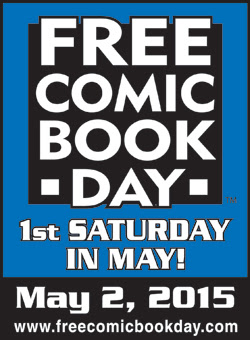 Yesterday was Free Comic Book Day (FCBD).  My daughter, Melody, and I participated with a visit to our favorite comic book store, Big Planet Comics, in College Park, MD.  They are a fairly large, very busy comic shop across from the University of Maryland, and they always do it up on FCBD.  They allowed every customer a limit of 10 free comic books, which was plenty.  Publishers throughout the industry participate, including Marvel and DC, though the quality is a mixed bag compared to regular monthly titles.  But it's great that there are comics available for many different age groups.

I started reading comics soon after I began to read.  My family used to eat at Bob's Big Boy fairly regularly, and back then, they gave out Big Boy Comics to all the kids.  That's my earliest memory of reading comic books.  I was introduced to Marvel Comics in the mid-70s, and I remember reading stories about the Hulk and Spider-man, among others.  My favorite, though, was the Avengers!  They were awesome, and led to a long comic-collecting hobby.  I still have thousands of comic books stored in boxes in my basement.  As you can imagine, I've been thrilled with seeing the Avengers get their own movies.

My first Avengers story was issue #164, written by Jim Shooter with artwork by John Byrne, two of the very best comics creators of all time.  The Avengers is known for having a revolving, constantly changing team of characters, and this issue featured Captain America, the Black Panther, the Beast, the Scarlet Witch, the Wasp, Yellow Jacket, and Wonder Man.  They battled the Lethal Legion, led by the nefarious Count Nefaria, and included Whirlwind, the Living Laser, and Power Man.  It was an action-packed story, and ended with a cliffhanger that I didn't see resolved for almost 20 years, when I found the issues containing the continuation of the story.  But I held on to this comic, and it remains the oldest comic I still have that I received when it was new.  I was an Avengers fan from then on.

I made sure that, when Melody was old enough, she would know about comic books, and she enjoys a small collection of her own.  For FCBD, she always finds several comics that catch her interest, and this year, we both got the maximum number available.  Comic Book shops see increased foot traffic and potential new comic book readers who walk in the door for possibly the first time, so FCBD is a boon for them, even though the comics they give out are not free for them.  Last year, Big Planet Comics featured the creators of the Lumberjanes comic, and my daughter was able to talk to them and get a free comic signed by them.  She has since read every monthly issue, and continues to be a big fan.  To support the store, I always make sure to buy something on FCBD (in addition to getting the free comic books), since I want them to stay in business.  The comic book business is a tough one for retailers, and they need the support.  Comic books are a lot of fun and are a great way for early readers to learn to read.  Support you local comic shop, and come out next year for Free Comic Book Day, every year on the first Saturday in May.

Have a wonderful weekend, everyone!

Pictures used on this site are copyright © of their respective owners and will be removed upon request.