Back Pain and Aging Gracefully

As I've documented here on the blog over the past few weeks, I've finally found relief from my sleep apnea with my CPAP machine, which has helped me to sleep so much better than before.  The new issue is trying to find a comfortable position to sleep without knocking the mask off my face or off my nose resulting in air hitting me in the eye or something ridiculous like that.  I'm a side sleeper, so sleeping on my back, which I'm not used to doing, would be hard, but would keep the mask on my face in the correct position.  So I've been sleeping on my back for the last week.  My main issue has been trying to stay comfortable.  My lower back is taking a lot of abuse.  A friend said that I needed to keep my knees raised, so I tried placing a pillow under my knees.  That still didn't help.  My lower back was still sore when I woke up each morning.  So I tried putting a pillow under my upper back.  Well, that was a mistake.

This morning, I woke up in severe pain.  My lower back felt like it was on fire.  I ripped the CPAP mask off of my face, and tried to roll over on my side.  It didn't help, and I just couldn't get comfortable no matter what position I was in.  The pain was excruciating.  I didn't know what to do.  I got up and tried walking it off, but it wouldn't improve.  I took some Bayer Back and Body and tried laying down again.  The pain was intense, but I was able to snooze for a little while.  I called the office to say I couldn't make it in.  I laid back down and slept for several more hours.  I finally got out of bed and went down to lay on the couch.  I fell asleep again for another three hours!  My back improved over the course of the day, fortunately, but I figured I needed a heating pad.  I went to the store to get one after picking up my daughter at school.

So now I'm trying to figure out what to do.  My back hurt so badly that I'm not going to be able to sleep on it anymore.  I'll likely go back to my side sleeping and just try to deal with the mask moving around.  That's a lot better than the aches and pains from last night. 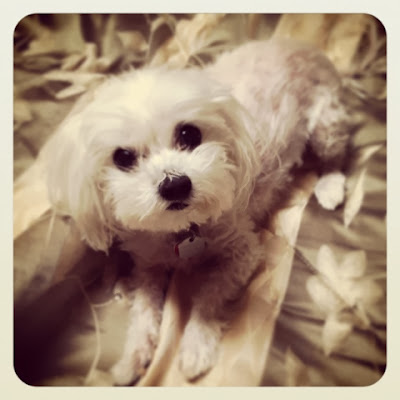 Faithful Pup Scout is getting old.  We've had her now for 12 years, and I've watched her deteriorate significantly over the past year.  Her back legs and hips are giving out, and it's harder for her to get around.  I carry her around the house (fortunately she only weighs ten pounds), and we no longer go for walks outside.  She does her business in the front or back yard.  She can't jump down off of objects more than one or two feet off the floor, and will bark at me when she needs to get down.  It's really sad to see, especially since it feels like she's aged so quickly.

A friend of mine at work suggested that I get another dog.  He figures that, when Scout's time comes, it will make it easier on me and my daughter, Melody.  Plus, he said, another dog will help keep Scout younger by playing with her and providing exercise and company.  I'm not sure how much I believe all of that.  Scout has been a loner for a long time.  I don't think she'd like to have to share her peeps, if you know what I mean.  It's kind of like the "only-child" syndrome.  They're so used to having everything to themselves, including attention, that I can't imagine they would be able to share.  Besides, Melody keeps telling me she wants a cat.  While I don't, a cat would be less work.  The downside is that my mother-in-law wouldn't be able to visit, since she's allergic to cats.  So I'm just not sure if that's a solution, either.

I have looked at a few shelter websites in the area to see what kind of dogs they have.  I would prefer to rescue a dog than go through a breeder, which is what we did with Scout.  I don't know what kind of dog I'd like to get.  Scout really has been an exceptionally easy dog to care for, even when she has longer hair.  No matter what, this process will be hard on all of us.  I can't imagine what life would be like without Scout in it.  She's a great dog.