My daughter, Melody, and I, despite the miserable rain yesterday, decided to have an "Adventure Saturday".  We tried to get up early, but the late night Friday caught up to us (Melody).  So after a slow morning, we hit the road at around noon and headed into DC.

We don't often go into the city.  The only times, really, are for special occasions, like concerts or museum visits, or the auto show.  I'm not a huge fan of DC, sort of a carryover from my childhood.  My father worked downtown for years, and we would visit him or meet him for dinner every so often.  But I never looked at DC as being anything more than a "special occasion" type of place.  With that said, I know there are a lot of good restaurants and other neat places that are worth checking out, so we want to try going there every so often.

Several years ago, we were in the Great Smokies down in Tennessee, and after going on a memorable helicopter ride, we had a great lunch at a neat restaurant called the Mellow Mushroom.  It's a pizza joint, basically, and a chain, to boot.  We typically don't eat at chains while traveling if we can help it, but since we had never been to the Mellow Mushroom, and there were none in our home area, we wanted to try it.  And it was good.  I don't remember much about it other than it was memorable enough to want to try it again someday.  Since that time, there are two Mellow Mushroom restaurants that have opened in our area.  One is in DC, in the trendy Adams Morgan neighborhood.  That's where we went.

Adams Morgan is filled with a variety of restaurants and bars well worth checking out (though I am not one who ever goes to bars...I go to bars that have restaurants with food worth checking out).  The Mellow Mushroom is one such place.  It was still raining pretty steadily, and parking being what it is, we had to park about a block away in a crazily overpriced garage ($15 for one and a half hours!).  The place is pretty small, much different from the spacious version we ate at in Pigeon Forge.  We sat in the bar area.  It was around 2 p.m., so it wasn't crowded, and we sat at a large tall round table by the front window.  Our friendly server recommended the pretzel appetizer, so we got a half order of the Parmesan pretzels with marinara dipping sauce.  They arrived pretty quickly, and we devoured them.  They were awesome!

Melody got a small cheese pizza, and I got the House calzone, which had mushrooms (of course!), spinach, peppers, and mozzarella, and was served with marinara.  The same dough used for the pizza is used for the calzones and pretzels, and it is pretty good.  It has a darker, browner look to it, and I suspect it contains cornmeal.  The sauce is tangy, but it's the cheese that gives it most of its flavor.  There's plenty of it, too.  It just oozed out of the calzone, and, on the pizza, you couldn't see the breaks between slices since the cheese was so thick.  It wasn't greasy, though.  It had a pleasant taste.  We wanted to take a few pictures of ourselves with our food, which we do at most of the restaurants we visit worth remembering, and after taking a picture of Melody with my iPhone, she wanted to see it.  I handed it to her and it slipped out of my hand, right onto her pizza.  I quickly retrieved it and was checking to make sure it wasn't damaged, and I dropped it again, right onto my marinara-covered calzone.  Marinara went everywhere, and as I tried to clean off my phone, it got all over my hands, my shirt, and I used every napkin on the table to clean it, and me, off.  At least the phone was fine.

I finished off most of my calzone, and Melody ate half her pizza, and we headed back in the rain to our Jeep.  The next stop on our adventure was the cemetery where my grandparents are interred.  I had not visited them in over two decades, so I was going on memory that I could find them.  I knew the cemetery was in Falls Church, VA, and on Lee Highway, but I didn't know exactly where it was in relation to the rest of the area.  Thank goodness for Google.  So after a lengthy drive in some heavy traffic, we arrived.  Going by memory, I found the location in the rather large cemetery where they were interred.  Their bodies are in vaults, not in the ground.  Melody asked a lot of questions, mostly about how their bodies get into the vaults, and stuff like that.  After a few minutes, we headed for home.  It was a good visit. 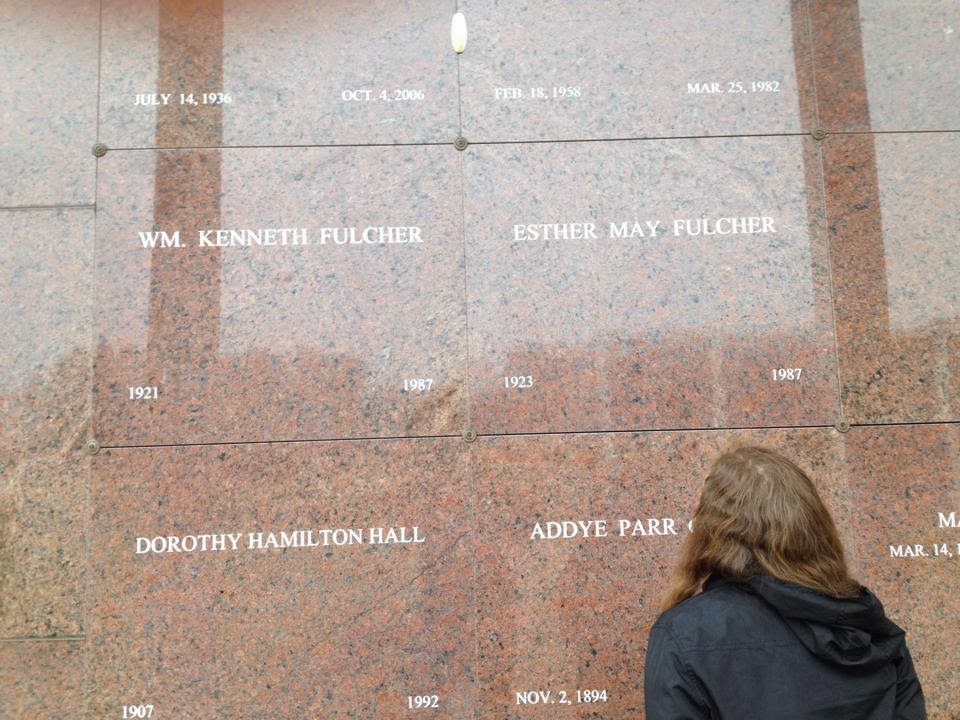 It's a shame it was such a rainy day.  Once we got back on the road, traffic was really bad.  I'm sure the weather had something to do with that.  You really don't expect such heavy traffic on a Saturday.  But it was a long drive from Falls Church back over to Maryland, and, unfortunately, because of the traffic, we weren't able to make it to church.  We needed to get a few groceries, so we stopped at the store and loaded up on what we needed, then we stopped for a quick detour at Sweet Frog for some good frozen yogurt before heading for home.  It was a great adventure, despite the rain.  It also prompted a lot of conversation about my grandparents.  I love being able to share stories about them with her.

Thanks for reading, and have a great Sunday!