My daughter, Melody, and I went to see a wonderful concert last night:  Sting and Paul Simon.  Both have been performing for a long time.  Most fans know that Paul was a part of a duo with Art Garfunkel before moving on to a solo career.  Sting was a member of The Police with guitarist Andy Summers and drummer Stewart Copeland, before abandoning them at their peak for a solo career of his own.  Now the two are touring North America with merged bands and playing their hits, and each other's hits, together.  When I found out they would be in Washington, DC, I tried to get tickets.  Unfortunately, I didn't find out until after the tickets had been on sale for a while, so the tickets I bought for our seats were in the far reaches of the Verizon Center arena.  They were the cheapest tickets available, however, and they got us in the door, so I surprised Melody at Christmas with the tickets.

So the show was last night.  Sting and Paul Simon are wonderful musicians and are experienced at their craft, so they put on a pretty good show.  The selection of songs included most of their hits, and I was especially surprised by the number of Police tunes Sting brought out of his bag.  I'm a bigger Police fan than Sting fan, so that was good with me.  And while I don't necessarily like all of Paul's older tunes, he performed a nice mix of old and newer hits. Melody has heard a healthy amount of the music I like, including The Police, Sting, and Paul Simon, so she also was familiar with and enjoys most of their songs, probably more so than me.  So she enjoyed the concert a great deal.  I loved watching her sing the words of so many of their songs.

The show was scheduled to start at 8 p.m.  We had arrived at 7:30 via Metro, and had gotten a couple of personal Papa John's pizzas.  They weren't great, but filled us up.  We reached our seats only to find we were sitting next to a couple of guys who had already been drinking for awhile.  They reeked of beer.  Our seats were in the 400 level, but we were in the front row and on the aisle.  The arena quickly filled up and the show started at around 8:20.  They sang "Brand New Day" to start off, then went right into Simon's "Boy in the Bubble", one of my favorites.  There was some fun banter between the two stars, with Paul noting that after a few months touring together, he felt Sting was rubbing off on him, making him feel like an Adonis.  That was probably the funniest line of the night.  Melody thought it was funny how short Simon was next to Sting.

Sting then did a solo set, singing "Fields of God", followed by one of the great Police hits, "Every Little Thing She Does Is Magic".  Next was "Englishman in New York" and "I Hung My Head", followed by a couple more Police songs, "Driven To Tears" and "Walking On the Moon".  Both surprised me, as neither were big hits, but they were well performed, particularly by the drummer, Vinnie Colaiuta, and the backup singer, Jo Lawry.  She was really awesome.

Paul Simon returned to the stage for "Mother and Child Reunion" and the two shared the stage again.  Then it was Paul Simon's turn to do a solo set.  This pattern went on to an exciting joining of the bands and featuring a few more hits, and a rousing "You Can Call Me Al" took us to the end of the show.  They returned for an encore to sing "Bridge Over Troubled Water", "Every Breath You Take", "Late in the Evening", and the Everly Brothers song, "When Will I Be Loved", with Sting and Simon alone on stage with acoustic guitars, at which point the two legendary performers walked off-stage arm in arm.

We had a few disappointments on the evening.  The two guys sitting next to us had to get up to either use the bathroom or get more beer every 15 minutes, it seemed, for the duration of the show, which required us to get up out of our seats for them.  Then when we left the arena and headed back to Metro, the subway was only running a few trains all the way to Greenbelt, our stop, and instead had more trains running only to Fort Totten.  Plus, we had to wait 20 minutes for the Greenbelt bound train, which allowed the platform to swell with people.  We were positioned to get on the train first, but were "pushed" out of the way by selfish late-comers with an "every man/woman/child for themselves" attitude, and we were not able to both get a seat.  My back was still killing me, and standing was not comfortable.  Then we got stuck at Fort Totten with the doors open for another 20 minutes so they could move the two trains ahead of us to the other track.  It was frustrating.  I don't know why Metro can't run more trains during major events downtown.

Anyway, that didn't ruin our night.  We were pretty tired by the time we got home, which was about 12:30 a.m.  We crashed and went straight to bed.  It was a great evening! 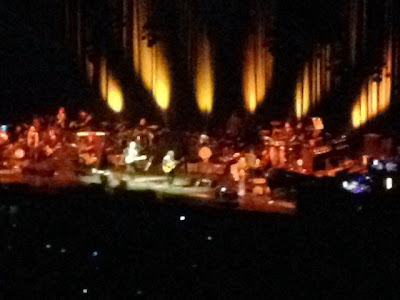