A Bunch Of Random Stuff 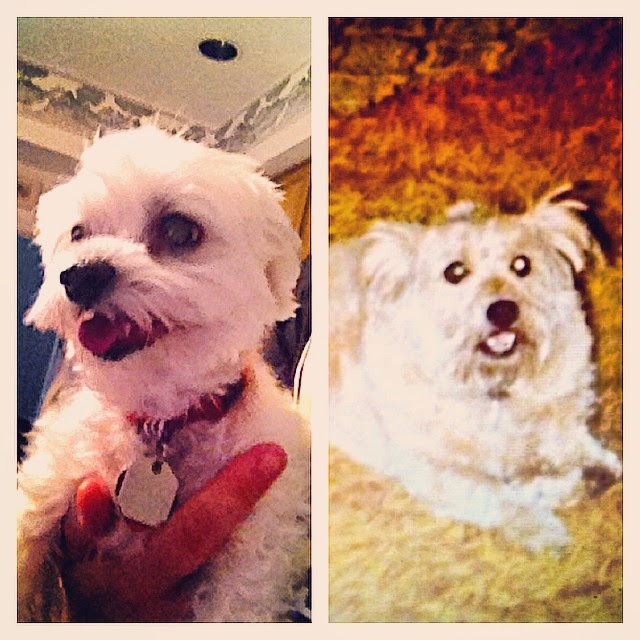 Scout is our 12-year old Maltese pup, and Ginger was our Peek-a-poo Terrier mix, a mutt all the way, who lived to be 16-years old after being hit by a car when she was a puppy and lost the use of one of her front paws and came very close to dying.  They are/were both wonderful pets and members of the family.  Ginger was my dog all the way, and though Scout started out as my wife's dog, she has adopted me since Teresa's death.  Dogs are the best!

I've been writing this blog on a semi-regular basis for a few years now, and while I've made no efforts to intentionally hide it, I do not advertise it on my personal Facebook page.  That means that many of my friends and family do not know it exists.  That said, just a few days ago, I set up a Facebook page for the blog.  You can find it HERE.  Please like it, and post comments.  I'll post links to the blog there.  I've already connected my Twitter and Instagram pages to Facebook, so I may as well connect all of my social media.

I make no secret of my love of Pittsburgh sports, though.  I love my Steelers, Pirates, and Penguins, and I've been very spoiled over the years.  The Steelers have won more Super Bowls than any other team with six victories, and the Penguins have three Stanley Cups.  The Pirates have won five World Series, though none since 1979.  But the 70s were an awesome decade to grow up in as a Pittsburgh fan, since the Pirates and Steelers were competitive all through the decade.  So it's interesting to live in the Baltimore-Washington area, where the teams have had some success, though nothing like in Pittsburgh.  I don't mean that as a slight.  It's just reality.  The Redskins had a string of successful years in the 80s and early 90s under coach Joe Gibbs.  The Ravens had their Super Bowl win two years ago, to go along with their win in 2000.  The Orioles have had a mix of success over the years, but nothing sustained.  And the Orioles and Nationals are both having great seasons this year.  The fans around here, though, don't have the same expectations that Pittsburgh fans have.  In Pittsburgh, the fans expect a winner every season, even the Pirates, who are getting their first taste of success in over 20 years.  Ravens fans seem to have reached that point, too, where the expectations are very high, but the rest of the local teams don't have as great a track record, and the fans, though dedicated overall, don't have the same feelings about their teams chances of success.  It's just an observation.  There are some diehards, particularly Os fans, but they're few and far between.

A new school year is upon us, and my daughter is really excited about being a big-time fifth grader.  It's really great to see the focus on serving, and my daughter will have the opportunity to volunteer in a number of ways at her school.  She said she wants to be a "media helper" in the library, though she also is interested in being a safety patrol.  Her other interests are art and music, and she has opportunities to volunteer there, too.  I love it.  And the fact that she is excited about volunteering is awesome.  I appreciate the school providing these opportunities.  I only have my daughter's school as an example, but I assume other schools in Howard County do this, as well.  But I still think it's pretty great.

My mother used to bake cookies for us on the first day of school, so when we got home, we'd have a tasty treat.  When my daughter, Melody, started Kindergarten, I took off from work so I could make cookies for her.  Unfortunately, I haven't been able to be home for her first days of school since then.  I was out of town twice, and I had to be at work the other times.  But I felt like it was important to have cookies this year.  So, they may be a day late, but I baked some cookies this afternoon for my girl.  We have a batch of chocolate chip cookies, my favorite, and a batch of chocolate brownie cookies.  They came out really good, and though I only had one of each, Melody had two.  And she seemed pretty happy about it.  Mission accomplished.