BRAIN GAMES is one of my and my daughter's favorite television programs.  It airs on the National Geographic Channel, and it focuses on how our brains function in certain situations or conditions.  It's always surprising to us how even some of our basic likes and dislikes can be influenced by things around us.

They recently aired an episode focused on foods and how we taste.  While I already knew that our sense of smell helps in our ability to taste food, it was particularly interesting to watch several food critics struggle to identify foods when blindfolded and their noses closed.  They were surprised, themselves, how difficult it was to figure out what they were tasting.  This had Melody and I talking about wanting to try this for ourselves.

Last Thursday, I stopped by my parent's place, where Melody was staying while I was at work.  Melody wanted to do the taste-testing game that night, using me and my father as guinea pigs.  So Dad and I were blindfolded and placed in kitchen chairs, while Melody and my mother gathered a bunch of different foods for us to try.  Insanity ensued. 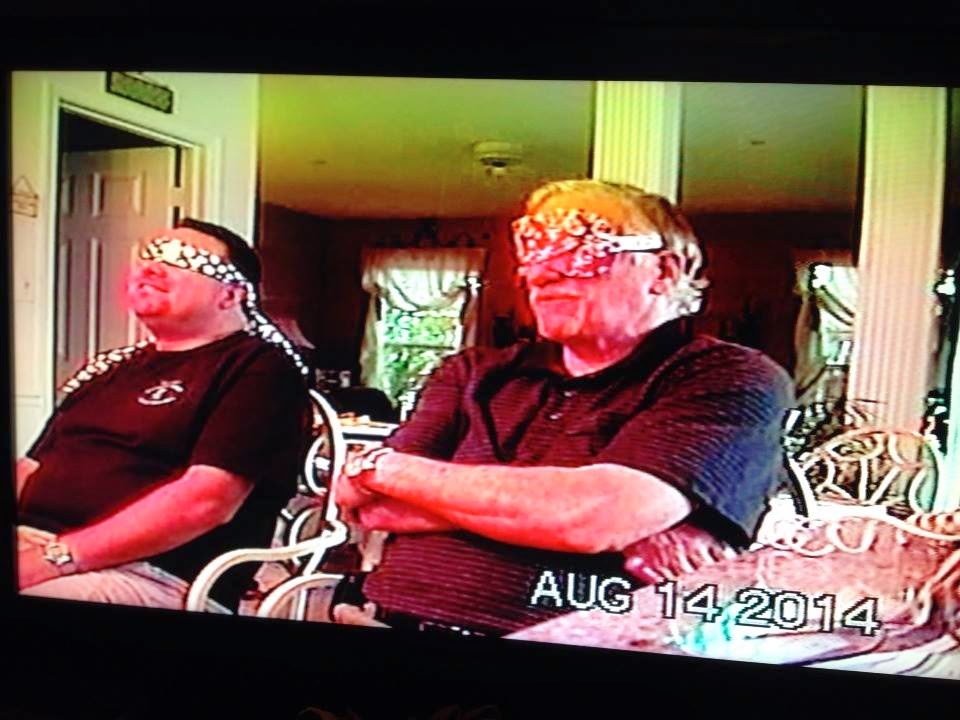 Let me pause and say a few things about how the evening went.  I've been feeling pretty rotten for a few weeks now, and only in the past few days have I started to really feel better.  I could tell I had improved because I was talking a lot.  That's a good indicator to myself that I'm doing well, and it's not unnoticed by those who interact with me the most.  By Thursday evening, I was feeling really well, and so the taste-testing was a fun exercise.  So fun, in fact, that we were all on the floor laughing after reviewing the video Melody took of the taste-test proceedings.  Mom said later that it was the most she's laughed in months, and I know that was my experience, too.

So Mom and Melody gathered a bunch of items from around the kitchen for Dad and me to try.  Since Mom hadn't seen the show, she actually made it more difficult than it was supposed to be, even as Melody agreed with using all of the things Mom picked out.  For example, the first three items ended up being three different grades of maple syrup.  While Brain Games picked out food items like barbecue sauce, Swiss cheese, pepperoni, and chocolate chips, all with very distinct tastes, it was next to impossible (it WAS impossible) for us to know that there were even different grades of syrup to begin with, let alone try to identify them.  Next was a couple of different flavors of jam (again, too similar to really tell the difference), and then three different kinds of pickles.  While I did better than I thought given the challenge, Mom was frustrated that we were having such difficulty identifying things that she apparently thought were pretty obvious.  It got worse when we attempted to guess with clothespins on our noses, but it hurt too much and didn't last long.  With Dad just throwing out random guesses (such as "valpeno" cheese and grape syrup), Mom getting frustrated with us, Melody's laughter at everything, and my attempts at serious guesses that weren't even close, it was hilarious.  We tried about fifteen different things, and I "won" 8-5, but it was more the fun of the evening than what we actually did that made it so entertaining.  Melody recorded the whole thing, so we watched it afterwards (Dad and I had blindfolds on during the taste test, so it was fun to see what was actually going on).  It was even funnier to watch it, and catch a lot of what was said versus what we heard initially as it was happening.  We've decided we're going to do it again at Thanksgiving, when my brother can join us.  When Dad, brother Darren, and I are together, things usually get a bit out of hand.  I can't wait.