Shaking Off the Melancholy

Hoo boy.  I spent the day fighting through this melancholy that has enveloped me (as detailed in yesterday's post).  This is not an easy process, but I'm trying to work through it slowly and just live and breath.  My work day started out fine, but I quickly got some disturbing news.  I have a bi-weekly check-in meeting with my boss, and today was our scheduled meeting.  It had been a long while since my last meeting with her.  She's very busy, and very often my meeting with her will either get bumped, or rescheduled, or cancelled.  Four of the past five meetings ended up getting cancelled, and while I can assume that she doesn't have any issues with my work and the work of my team, I do get frustrated not being able to meet with her regularly.  Today was one of those days where our meeting was cancelled, literally 20 minutes before we were due to meet.  My paranoia alarm immediately went off.  I can't help but take it personally, so I touched base with my boss's executive assistant, and she assured me that there was nothing to it.  My boss is stretched very thin and she has a lot of unplanned meetings and other commitments.  So I guess I was concerned for no reason, but given my current mental state, the timing wasn't good for something like this.

That said, the rest of the day went okay.  I still came home not wanting to do anything.  I crashed for a little while.  I ordered some delivery for dinner, since I didn't have any food in the house and I didn't want to stop at the store.  I found myself really missing my daughter.  Melody is spending the week with my in-laws, and today they took a little trip to Lancaster, PA.  They'll be home on Thursday.  Melody was not happy because she found out yesterday that she has a case of head lice.  I felt so bad for her.  She likely contracted it at camp, and I was really concerned that other kids may have gotten it, too, so I had to let the camp director know about it.  I had to be THAT parent, and my daughter is THAT child.  Anyway, she's pretty down about the whole thing.  We went through this about four years ago, and while the treatment isn't painful or anything, she isn't able to have her favorite stuffed animals with her for a month, until it clears up. 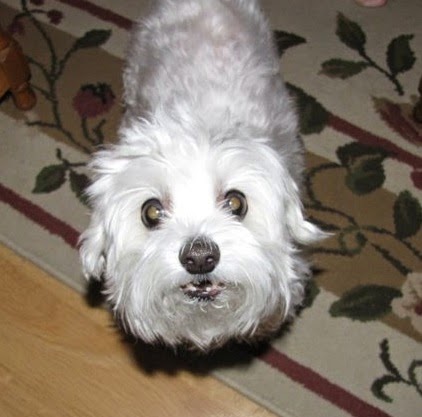 I read a neat article about dogs.  I wish I had the link so I could post it and give credit to whoever wrote it.  I saw it on Facebook, but now I can't find it.  The gist of the article is that there are things that humans do that their dogs don't like.  The big thing, and I got a kick out of it, is that dogs don't like it when their people talk to them.  They just don't understand what we're saying except for a few words here and there, and they get confused.  Dogs are really good at reading body language, and the combination of words and movements get them confused, and actually makes training them that much harder.  I thought about how much I talk to Faithful Pup Scout, and it amused me that she probably does hate it when I talk to her.  I talk to her a LOT.  I don't think she dislikes it, since she's twelve and a half years old and I've been talking to her over her whole life.  I'd like to think she's used to it, but...who knows?  Dogs also hate being hugged.  That may be true, but I also know that Scout likes being carried, which is likely due to her small size.  Lastly, the article said that dogs hate it when their people are boring.  They don't like it when their owners come home from work and just sit on the couch doing nothing.  They've been alone all day, and their ready to play or run around, and sitting around doing nothing is not their favorite thing.  With regard to Scout, I actually think she does enjoy it when we sit around on the couch doing nothing.  When she was more active, it was probably different, but now, at her advanced age, I think she likes doing nothing at all, as long as she is sitting with me.  Anyway, the whole thing was amusing to me.

So, at around 8 p.m., I decided to take the pup and the two of us took a little ride with the top down.  It had been a warm day, but it was kind of nice as the sun was going down.  I stopped at Sweet Frog and got some (sugar-free) frozen yogurt, and then we drove around Laurel until it got dark.  It was kind of fun to get out, but it didn't completely shake me out of the funk I'm in.  I'll keep trying little things to bring me out of it, and we'll see what happens.

I'm now off to bed.  Have a great evening, everyone!