The day started out bad.  Faithful Pup Scout, who sleeps on my bed at night, did something really bad this morning, the first time she's ever done this:  She wet the bed.  I got up at 5:30 a.m. to get a shower, and after getting ready for work, I noticed Scout sitting on the edge of the bed.  She usually keeps sleeping while I'm getting ready, so this was unusual behavior.  That's when I noticed the wet spot.  Scout's side of the bed, with several towels and a thick pad under the sheets just for a situation like this one, was completely dry.  My side of the bed, though, was all wet.  Scout, apparently not as dumb as she is ornery, knew she had done a bad thing.  It had already soaked through the sheet to the mattress.  I was thoroughly angry.  I spent the next 20 minutes cleaning it up, and I was late arriving at work.

The training workshop that I had been preparing for took place all day yesterday and today.  It went better than I could imagine.  I brag all the time at work that I have the best group of managers in our organization, and they only confirmed it today.  I was pleased with the open discussion and the complete engagement of each of them, and our facilitator was great.  We will continue these workshops every four months or so for the next few years.  This was just an introduction to the topic.  The workshop is designed to provide the managers with tools and techniques to help us be better leaders.

The best part of my day was knowing that my daughter was coming home today after spending the week with her grandparents.  Things didn't go as planned, since I wasn't able to pick her up after work.  But we instead decided to meet at the Howard County Fair.  When I got to the fairgrounds, I got a big hug from my daughter.  It was great to see her, and even though we talked on the phone semi-regularly while she was gone, we spent the evening recapping everything she had done this week.  It was a lot of fun. After getting some dinner, we headed over to the midway to ride a bunch of rides. 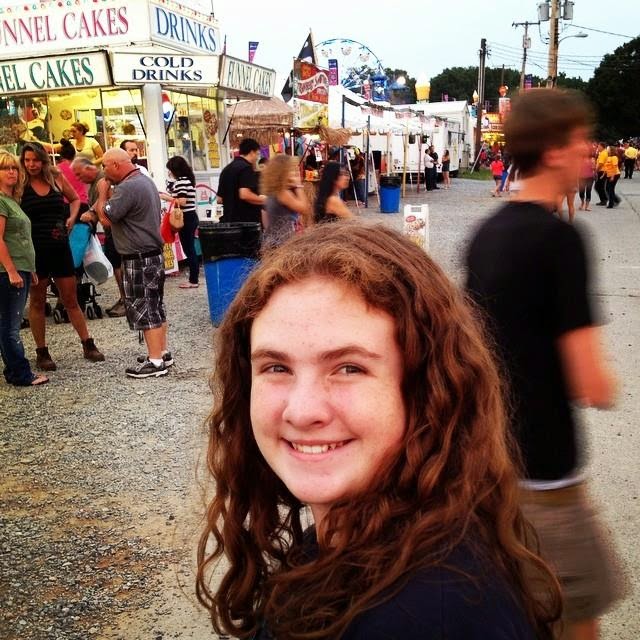 I'm not sure why the ride operators at fairs and carnivals feel the need to operate the rides either faster or longer than amusement and theme parks.  We rode "Rock'n' Out", which contains a ring of cars that swing side-to-side while spinning.  It is vomit-inducing.  After the big meal at dinner, and dizziness affecting both of us, I was sick.  Really sick.  Melody told me she wasn't feeling very well, either.  I'm convinced that the ride lasted about a minute longer than it should've been running.  We staggered off, and it took a little time to start feeling better, but we finally did.

The midway had gotten really crowded by 9 p.m., and the lines for the rides were ridiculously long.  Friday being "Date Night" means lots of young teenage couples in attendance.  We gave up trying to do anymore rides. Instead, Melody wanted to try a game of skill:  popping balloons with beanbags.  The attendant convinced us to go with the $10 option of six beanbags instead of three.  Melody broke all six balloons.  The attendant told us, with three more hits, she could win a larger prize.  I gave in after Melody gave me those sad, puppydog eyes.  $5 more lead to three more pops, and her winning a large stuffed giraffe.

We decided to head home, but not before stopping at Sweet Frog for a treat.  It was great to have Melody home.

Have a  great evening, everyone!