My little brother is a pretty cool dude.  Darren is a giant of a guy, standing an impressive 6'6".  He keeps himself in fairly good shape.  He's active.  He works in the security field, and is out there chasing down the bad guys.  He's a family man.  He is engaged to be married to a very nice young lady with two teen daughters from a previous marriage.  He has a heart of gold.  He'll do almost anything for his friends and family, and is fiercely defensive of them.  He hasn't always taken the easy road.  He could've gone to college, but elected to pursue something providing more independence.  He could've had a nice desk job, perhaps working for the Federal Government.  But that wasn't in the cards for him.  He finally achieved his dream of going into law enforcement after years of climbing the ladder and gaining the experience he needed.  I would hate to be hunted down by him for doing something wrong.  He's an intimidating presence.

Darren wasn't always a tall guy.  While I seemed to grow to my full height by my freshman year in high school, Darren took his time.  He didn't really start to grow until after starting high school, and then he shot up very quickly.  By the time he graduated high school, he was my height and still growing.  No matter how tall he got, though, he remained my little brother, and I was quick to remind him of it all the time.  We weren't close buddies.  We had many opportunities to do things together, and while we enjoyed it, we still mostly wanted to do our own things.  We have some of the same interests, like our love of roller coasters and the Pittsburgh Steelers.  We are the epitome of Oscar and Felix, though.  He's a night owl.  I'm an early bird.  He was always more athletic.  I was always more studious.  We fought with each other.  The longer we're together, the worse it gets, so we have to limit our time with each other.  I once thought we would be a great team on The Amazing Race because we would likely fight the whole way around the world, which would make for some fun TV watching.  Less time together meant we tried to maximize our time when we were together.  He's a funny guy, and we did a lot of joking around when we were together.  It was necessary for us to limit this time, however.  Anything more than a day or so resulted in "brotherly love", which can be further defined as "someone is going to get killed!"  When we fight, we tend to yell a lot.  We're too old now to actually get physical, but we used to.  And riding in a car with him is a challenge.  I'm a nervous wreck when he's at the wheel.  I'm even worse when we're on a road trip together and he's driving MY car.  We've had a few too many close calls.

There's a little bit of sibling rivalry and jealousy between us.  While I was the "good" kid, because I never wanted to get in trouble, Darren experimented with stuff I could only imagine.  He told me he tried drugs once, and it was a frightening experience.  He likes his alcohol on occasion, while I've passed out after one glass of wine, so I don't drink at all.  I seem to always want to be in charge, which bothers him since I usually get my way, since I'm older.  My algebra teacher in high school, a difficult man who didn't like his students, liked me, and when my brother had him as a teacher five years later, Darren struggled, and the teacher asked him why he wasn't more like me.

Darren was a true ladies man.  I didn't date much.  It was all about quality over quantity with me.  But Darren could get a date with any girl he met.  He was smooth, and could pour on the charm.  I could never do what he did.  I just didn't have it in me.  If I allowed him to be my wing man, I'd probably have a date any time I wanted one, but the girl would still end up liking him better.  While I always looked for the long-term relationship, he was a love 'em and leave 'em type, at least when he was younger.  Then, after I got married, something clicked for him and he began looking for long-term relationships.  The young lady he's with now is the longest relationship he's ever had, and it looks like it's for good.  I regret that my wife didn't know her, as I think we would've enjoyed double-dating and doing things together as couples.

He's always been supportive of anyone who's in trouble.  When my landlord, the crazy guy I rented a room from many moons ago, accused me of breaking into his bedroom (which was absolutely ludicrous when all of the evidence pointed to the other guy who was renting a room there), Darren came with me when I had to confront him with the truth.  It worked.  My landlord backed down.  Darren can be very intimidating.  The night Teresa, my wife, passed away, he arrived at the hospital minutes after my in-laws, and his presence was so comforting.  And when my sister had a lengthy hospital stay, and I needed someone to take care of my daughter in her place, Darren volunteered in true "Mr. Mom" style.

While Darren and I haven't necessarily been super close, he's my brother and I love him dearly.  Happy 40th birthday, Kiddo!  Stay in God's grip!  I love you! 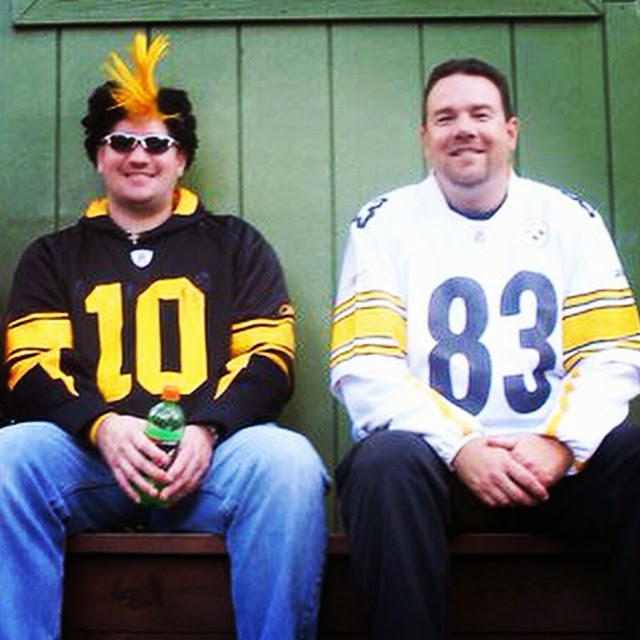