While in New York, my daughter and I took a tour of the city on the Gray Line double-decker bus tour.  I bought tickets in advance, since the website highly recommended it, and I thought I would get the best deal by getting a 72 hour pass which would allow us to get on and off the bus wherever we wanted all three days we were in the city.  The bus would also take us to all of the sites we wanted to see. 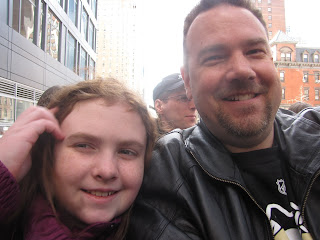 When we arrived in New York, though, we were not able to get to the bus terminal near Times Square to get our tickets because of traffic, so we lost a day.  The following day, we walked across town to the Gray Line terminal and found out we would have to wait in the same line as all those who didn't purchase advance tickets.  It took us over 30 minutes just to pick up our tickets.

With tickets in hand, we went to the starting point for the downtown tour.  Unfortunately, the map did not show exactly where this was, and we ended up in line for the uptown tour.  The downtown tour line had already boarded another bus that was about to depart.  We ran for it and were the last to board, getting the last two seats available in the upper deck.  It took about 20 minutes for the bus to get out of Times Square because of traffic.

The tour from that point was kind of nice, and we saw many of the sites we wanted to see.  When we arrived in Chinatown, we hopped off to get some lunch.  We had a terrific lunch at Shanghai Heping Restaurant on Mott St.  We then headed to the 9/11 memorial to find the bus stop.  This ended up being extremely difficult since the stops are not marked, and the map was of no help (and I'm a cartographer by trade....I know how to read a map, make a map, design a map... this map was not very good).

After a good bit of wandering around near Battery Park, we found the bus stop there only because there was a double-decker bus parked there.  With that knowledge, we decided to board the Staten Island Ferry to get our best view of the Statue of Liberty (the island was still closed to the public due to Hurricane Sandy damage).  After a round trip ride, we again boarded the bus.  We were informed that this was the last bus back to Times Square.  In the meantime, while our bus was parked and we waited to leave, two more double-decker buses drove by.

We really wanted to see the night-tour of the city on the double-decker bus, so we hopped off the bus we were riding at Rockefeller Center and walked back to Times Square.  It was just starting to get dark.  We found the night-tour bus and boarded.  Unfortunately, we were seated in the section under the plexiglass roof which, while keeping us warm, was scratched up so badly that you could not see through it very well, let alone take pictures through it.  It lasted almost two hours with no stops. 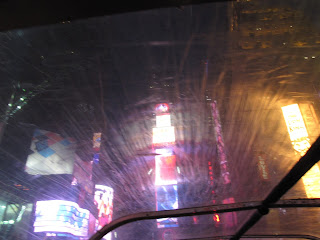 We hoped things would be better the next day, our last in New York City.  We checked out of our hotel and walked over to the United Nations.  After getting some pictures, we waited at the bus stop indicated on the map.  It turned out that this stop was elsewhere, not where the map specified.  After getting to the correct location, we watched not one, but two double-decker buses blow right by us without stopping.  We continued to wait, but after another 30 minutes, we decided to walk.  We were in need of a pit stop, so we used the Waldorf Astoria Hotel as our rest stop.  Then we went to Rockefeller Center again to catch the bus there.  We waited for over an hour and no buses showed up.  We were running late on time, and decided that we would just have to walk to our last destination before heading out of town.

My conclusion is that, while the Gray Line tours sound good, they are really not as good a deal as you might think.  There are better ways of seeing this wonderful city, and I would look for them as alternatives to Gray Line.  Sometimes you're better off touring the city on your terms.

Lastly, I just want to add that New York City really is an awesome place to visit.  Sure, the people can be rude, no one is going to hold your hand, and the subway system is a mess to decipher, but the city has this charm about it that can't be compared to any other city I've been to.  I've always been a bit intimidated by the idea of spending any time in NYC, but I was totally wrong not to visit sooner.  It's better than Los Angeles, Chicago, Boston, and even DC, my own hometown (but not better than San Francisco -- that place is awesome!).  We're already looking forward to our next trip.
Posted by Eric Freed at 9:59 PM