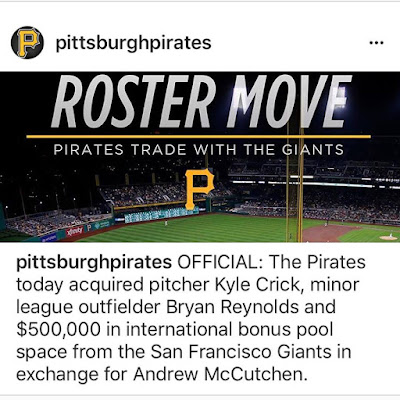 I became a Pittsburgh Pirates fan in 1979, as the Bucs won the World Series over the Baltimore Orioles.  My father grew up as a Pirates fan, and he passed on that love of the Bucs to me.  Even while the Steelers captured all of the headlines that year as they won their third Super Bowl, and followed with another the next year, I became a diehard baseball fan.  It was a good time to be a fan of Pittsburgh sports teams.

But that 1979 World Series Championship has turned out to be the last one the Pirates won.  I excitedly followed the team all through the horrible 80s, when the Pirates became one of the worst teams in baseball.  In 1987, they made a trade that led to a return to greatness, as the Pirates won their division in 1990, again in 1991, and yet again in 1992.  It was so exciting to have the Pirates back to their winning ways, even if they failed to return to the World Series.

1992 was particularly noteworthy because I went to my first and only playoff game, Game 5 of the National League Championship Series.  It was fantastic to be at that game, sitting way up in the rafters of old Three Rivers Stadium, as the Pirates were in a rematch from the year before, against the Atlanta Braves.  Pitcher Bob Walk pitched a complete game shutout, giving the Bucs a 3-2 series lead as the teams went to Atlanta for Games 6 and 7.  Little did we know that the Bucs would lose those two games, with Game 7 being an all-time classic as the Bucs lost after having a 2-0 lead with 2 outs in the bottom of the 9th.  Sid Bream, former Pirate and former favorite player, scored the game-winning run, breaking my heart.

The Pirates ownership broke up the team after that season, and that led to 20 years of losing seasons, with the team almost getting sold and moved, saved again with the building of the best ballpark in baseball, PNC Park, but continued losing until Andrew McCutchen, the Bucs star Center Fielder, led the team back to prominence and a return to the playoffs.  The excitement was back, but it was short-lived, as the team lost each year, and the Pirate's front-office, always putting the payroll above winning, decided to give up on the team after a 98-win season, and, in the last few days, began dismantling the team with the trade last week of young pitching phenom Gerrit Cole, followed by today's trade of Andrew McCutchen, the face of the team.  This is a slap in the face of the Pirates faithful fans.

I should know better than to get excited about the Pirates.  They have given zero indication that they care about the fans, or winning.  It has always been about the bottom line for Bob Nutting, the cheap owner (who "threatened" to never sell the team).  They just don't care.

But the Pirates are "my" team, too, and I hate that Nutting doesn't care about me or other fans.  It's unfortunate that the Pirates' owner can't be held accountable by anyone for fielding a minor league team, and for caring about money more than winning, which goes against everything sports is supposed to be about, and their is nothing that I or any other fan of this team can do about it.  You would think the owner would have a responsibility to at least try to win, but he just doesn't care.