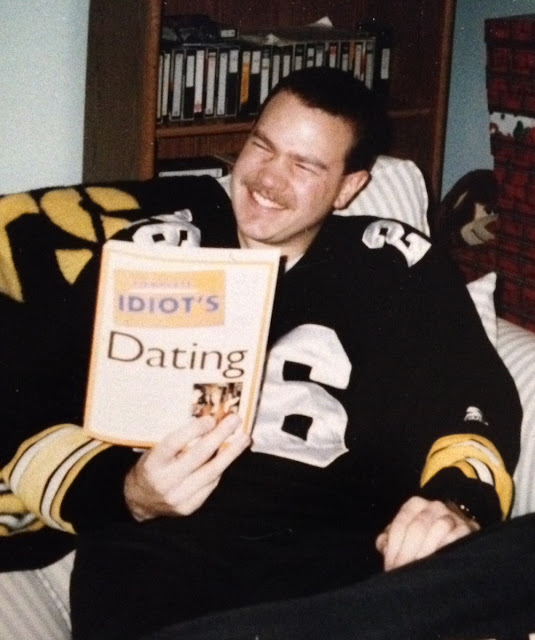 I was recently asked if I was dating anyone.  I replied with a quick, "No."  The last date I went on was over 4 years ago.  It was a second date, and I don't go on very many of those, so there's that.  But it was clear that it wasn't going to work out, particularly after the last date, when we exchanged emails that basically said the same thing:  I told her I got the impression she wasn't interested in me, and she said she thought I wasn't interested in her.  And that was that.

I tried dating a couple of years after my wife, Teresa, passed away.  With a lot of encouragement, I signed up at several dating sites, and went on a small handful of dates with several women, none more than once.  I either wasn't interested enough in them, or I was being haunted by my dead wife, since these other women weren't enough like her.

Then there was that woman in Oklahoma, which got serious enough for us to discuss marriage, but after she told me she had bought a wedding dress a month after we started dating, and then admitted she had trust issues, I found myself second-guessing the whole thing.  Plus, the long distance doomed us.  When she told me she never wanted to move to Maryland from Oklahoma, and resented the fact that I wouldn't uproot Melody and our life in Maryland to move to Oklahoma (and she grew up in Nebraska!), it was over.  It was an ugly breakup, and I'm surprised I was even able to date anyone after that.  Long distance relationships never work out, at least for me, and they're way too stressful if one isn't being truthful about how they feel.

I reluctantly went on several blind dates after that, and they ended up being miserable experiences.  I wasn't having any fun, and I found myself getting more and more depressed over not finding anyone worth pursuing.  I tried one more round of a dating site, and then quit.

Probably the main reason I stopped dating was due to a conversation I had with daughter Melody.  She flatly stated to me that she didn't like it when I dated.  What she was really saying was that she didn't like that I was giving attention to someone other than her.  She noticed that she was taking a backseat when I was dating, and it bothered her.  A lot.  And I hated that it bothered her.

Our situation is unique.  My wife, Teresa, passed away in 2004 when Melody was only 5 months old.  Melody never knew her mom.  She has no memory of her.  She has seen many videos and pictures and heard stories about her mom, so she knows how great Teresa was.  And she WAS awesome!  But Melody has no real emotional connection to Teresa other than knowing she was her mom.

So, for almost 14 years now, it has just been the two of us.  Me and my Melody.  I love my daughter.  She is all of the best things I remember about Teresa, with a dash of whatever is left of my best qualities, all rolled into a sweet-natured package that I just love.

We have our bumps.  She can be stubborn, and she doesn't always like listening to what I have to say to her.  She is a teenager, and I don't have to tell you what that means.  She frustrates me sometimes.  But she's so talented, too.  And she's hilarious. She makes me laugh.  She's very smart, and she does very well in school.  Her teachers all like her.  She is a fantastic musician, and she has natural talent, both singing and on her clarinet and ukulele.  She's a very talented young lady.  And she knows she's the apple of my eye, the center of my heart.  And she doesn't want to share me with anyone else.

My married years were some of the happiest of my life.  The desires of my heart were to find a love like that once again, but only if it meant that I wasn't alienating my daughter.  I know there are benefits for her (and me), but I also know that I need to be all in if I decide to date again.  And, right now, I'm nowhere near ready for that.

The truth is that I'm still battling depression and grief, even 14 years after Teresa's death and homegoing, and I miss her so much.  So I'm in no position to be dating, anyway.  It has also crossed my mind that I may never date again.  I'm getting older, and my best days are well behind me.  My heart needs to be in it, too, of course, and it just isn't.  God might have other plans for me, maybe even way down the road, but He certainly hasn't said anything to me.  And I'm okay with that.

The Bible has the last word:  Paul said, in 1 Corinthians 7:8-9, "To the unmarried and the widows I say that it is good for them to remain single, as I am.  9 But if they cannot exercise self-control, they should marry.  For it is better to marry than to burn with passion."  I'm certainly not burning with passion, so it sounds like where I need to be is in service to God, and not out there dating anyone.