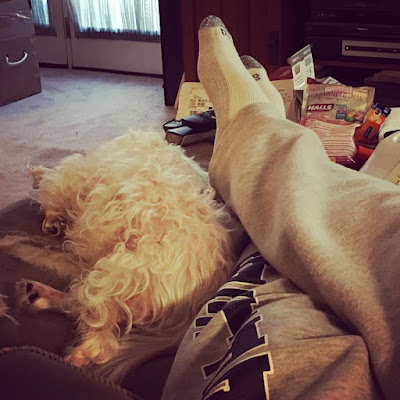 Some days, you just have to take a sick day...

I've been battling a very bad cold for the past several days, and it seemed to hit its peak overnight.  I had a poor night sleeping, so I elected to call in sick from work for the day.  My understanding boss gave me the okay, and my employees said they could handle things without me.  Then, after taking Faithful Pup Scout outside for a quick constitutional (and it WAS quick... It was too cold not to be), I took a dose of NyQuil and went back to sleep.  And Scout let me sleep, too.  The next thing I knew, it was quarter after noon, and Scout was still sleeping deeply.

Daughter Melody came home from school today excited about the prospects of snow overnight tonight.  Most of the school systems have already made decisions about delays tomorrow morning, though we have yet to hear about Howard County.  The forecast is for a dusting to 3 inches of snow.

I'm still much like a kid deep down, I guess, since I love getting snow, and even the prospect of school getting delayed or cancelled is exciting.  Part of it is being able to put aside the responsibilities of being an adult, at least for a little while, when everything shuts down as a result of the bad weather.  The other is just a love of snow.  When it's as bitterly cold as it is right now, it seems like a waste not to have snow to go along with it.

I'm reminded of the heavy snows of my childhood, and one in particular:  the blizzard of '79.  My family and I had gone to visit my grandparents, who lived in the little town of Libertytown, MD.  We were aware of the blizzard coming our way, and the night before, with schools already cancelled, decided to stay at there home one more night.  The following day, we awoke to a winter wonderland, with more than half a foot of snow.  We dug out my grandparent's driveway and walkways, then we began the trek back home, to Upper Marlboro, MD.  The drive was hampered by the deep snow, more than a foot as we got closer to home.  There were only two clear lanes in either direction on the Beltway around DC, and once we got close to our neighborhood, the roads were barely clear enough to allow two cars to pass each other.  Our neighborhood street had not been plowed at all, and we had to park at a neighbors house until a path could be dug to our house.  The whole neighborhood was out digging, and we eventually were able to get our car up the street to our house.  The snow was up to my waist.  I remember our dog, Ginger, struggled to hop thru the snow (she was a terrier mix, and weighed less than 25 pounds).  I think school was out for a week while we dug out and waited for it to melt.  Those are fun memories.

We just received the news that Howard County is delayed two hours tomorrow, as I'm typing this, and weather conditions will be reevaluated tomorrow morning.  I have a truly happy daughter.

I'm thankful tonight, given the potential bad weather and current cold spell, coupled with my illness, that I'm able to take off and rest, as this is clearly what my body needs right now.  Tomorrow may bring more of the same.

Stay safe out there, and have a wonderful evening.