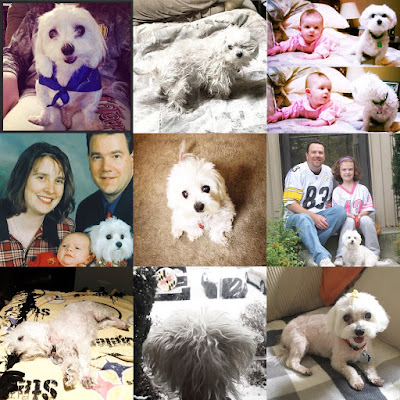 We received the phone call in early February 2002 from my Aunt K in Pittsburgh:  The breeder that had provided two Maltese pups, Rocki and Penny, to my aunt's family, had a single female pup available from the same parents, born on January 1, 2002.  Did we want her?  My wife, Teresa, and I had discussed it at length and we knew we wanted a dog.  Teresa had fallen in love with Rocki & Penny upon meeting them a few years before, and the chance at getting a Maltese was too exciting to pass up.  Teresa promised she would take care of her if we put up the money for her.  I said okay.

The breeder sent us several pics and told us we could have her at 10 weeks.  We circled the mid-March date and made arrangements to stay with my aunt's family.  Teresa already named her.  She was "Scout," named for the little girl in Teresa's favorite novel, "To Kill A Mockingbird."

March rolled around and we excitedly made the trip to Pittsburgh, loaded up with puppy food, a crate, collar, leash, toys, and treats.  We arrived at Aunt K's at about 2pm, after a 5 hour rainy cold trip.  We were there no longer than 30 minutes when the breeder rang the doorbell, arriving with little Scout.  And little she was!  She barely filled the palms of our hands!  But it was love at first sight for Teresa.  Scout was definitely her dog.

She was nervous at first, but soon Scout was chasing the two other larger dogs around the house, yapping and playing trying to exert her authority.  It was fun to watch.  Teresa, who had never had a dog before, was clearly enamored by her new little pup.

We stayed overnight, then went to church with Aunt K and her family, leaving Scout in her crate for the first time.  After lunch, we packed for the long drive home, making a nice little area for Scout just behind the front seats of our Jeep Cherokee.

It was snowy through the mountains, so the drive was even longer with the heavy, slow traffic.  We stopped at a rest area along the PA Turnpike.  Scout was napping, and Teresa and I both had to use the rest room.  When we returned, Scout was awake and seemed to be wondering what happened to us.  We took her for a little walk in the snow, then loaded back up and drove the rest of the way home.

We are still in the same home today.  Teresa passed away only two years later, but Scout will always be her dog.  Yesterday, we celebrated Scout's 16th birthday.  She is my shadow and my companion, and Melody has adopted her as her little "big" sister.  We watch as her little body ages somewhat gracefully.  She sleeps most of the time.  We carry her 9 pound body around the house now, only because it's easier than waiting on her to walk slowly across the room.  She doesn't do stairs anymore.

We know our time with Scout is growing short.  At 16, we're on borrowed time, knowing that the Maltese breed averages 8-12 years.  We love our little Faithful Pup Scout.  Happy Birthday, old girl.

Have a great evening, everyone!
Posted by Eric Freed at 9:21 PM