"Death cannot stop true love.  All it can do is delay it for a while."  -- Westley, to his true love, Buttercup, in THE PRINCESS BRIDE 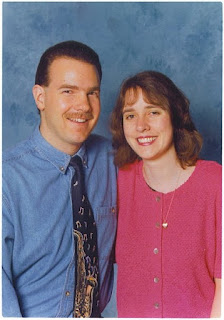 After 13 years, you might think that a significant life event would lose a bit of its impact, but I tell you, in fact, that isn't the case.  It was more than 13 years ago that my wonderful wife, Teresa, left this life to spend eternity with our Lord and Savior, Jesus.  And given His promise of eternal life, I am assured of seeing her again.

But what of this life?  The death of a spouse is traumatic to the survivor, regardless of age, but most would say that their image of a widow or widower is that of someone well seasoned, not a young adult, as a young widow shared in her blog, which I read just today. (https://ericaroman.me/2018/01/06/this-is-what-widowed-looks-like/)  She's correct.  As we age, it's natural to think of one's own mortality.  But, when one is barely into one's thirties, or twenties, or even forties, death is not something we think about...unless it touches us in some way.

I've had a few brushes with death.  When I was 18, only a month after graduating high school, I was involved in a traffic accident in which my grandparents were killed in the car I was driving.  We were rear-ended by a tractor-trailer.  I likely would have died in the accident if I hadn't been pulled out through the driver's side window before the car went up in flames.  I suffered a concussion and have no memory of the accident, which, because it was a multi-car pile-up, authorities found no one to blame for its cause.

The loss in this case was my grandparents, who I loved so much.  It was tragic, given the circumstances, as is all loss.  My mother, in particular, suffered greatly for many years after.  It dramatically changed the dynamics of my family in ways too numerous to explain here.

Then, just six years later, my last remaining grandparent, my grandfather, Pap, passed away after a long battle with cancer.  I held his hand, as the entire family gathered around his bed when he breathed his last breath.  I had so much respect for that man, and I mourned our loss, despite his 83 years.

The only thing made bearable with these losses was the knowledge that they had each lived a fairly long and fulfilling life.  This was not the case with my wife, Teresa.  She was only 31 when she passed on.  It has always bothered me that we were married fewer than five years, and I knew her for only six.  What I did know is that she was my true love, a love that was blessed by God.  I also know that, as short as it was, she did live a fulfilling life, filled with all of the people she impacted by sharing her faith, or her love.  She was always a loving person, and always looked at the good in everyone and everything.  She impacted me more than anyone, and I think about her everyday.  And while our daughter, Melody, missed out on knowing her at all (she was only five months old when she passed), she got perhaps the best gift of all:  She is benefiting from her mother's genetics, because she has the potential to be everything her mother was, and so much more.

That said, grief still haunts me.  The loss was great.  I miss her so much.  That's probably what I miss the most:  having her in my life.  I hate being lonely.  She was my best friend, and there is no substitute for her, no one to fill that void in my life.  And while I know God is more than big enough to fill that void, what He does in my life is much different than what Teresa did.  She was my true love., and I don't know if I'll ever be strong enough to search for that kind of love again.

Have a great evening, everyone.
Posted by Eric Freed at 10:06 PM