We awoke at around 8 and had a leisurely morning getting ready.  We decided to go out to breakfast at Denny's, which was relaxing.  I love Western PA!  After a fine breakfast, we headed out to Kennywood Amusement Park!

We parked in the upper free parking lot, which required a longer walk, plus a ride down a pretty long covered escalator.  We went through the gate and entered the park.  Kennywood is really an old time amusement park, over a hundred years old, with many old rides still in operation, as well as several old wooden roller coaster that have been around forever.  It has such a great atmosphere.  Lots of families and friendly staff make it really fun.  The only downer on the day was how hot and humid it was, with temps in the upper 90s.  The humidity made it feel worse, and I was sweating profusely before we even got in the park.

Kennywood has a brand new roller coaster this year called the Skyrocket.  It's a launch coaster, but at a smaller scale than many of the ones we've been on in the past.  It's not a long ride, but it has it's moments.  I wouldn't call it a serious thrill ride coaster, but it's fun.  Interestingly, there's a warning sign with all of the requisite warnings about heart issues, back issues, pregnant women, etc., but it also included a note about diabetics shouldn't ride.  That's a first for me.  And even though I'm a type 2 diabetic, I rode it and had no problems. 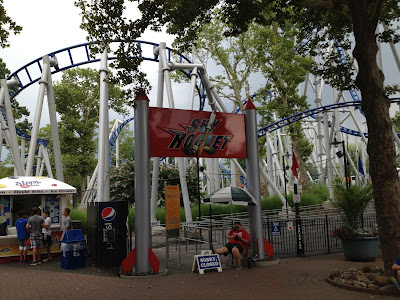 We rode a neat little ride-through boat ride themed by Garfield the cat having a bad nightmare about food.  It was cute, and it cooled us off since it is entirely indoors.  Then we rode the Racer, a neat old wooden roller coaster that features a parallel track with two coasters that run side-by-side, but is actually one track that reverses on itself, meaning you start on the right side and end on the left.  It is the only one like still in use in the US, built in 1927. 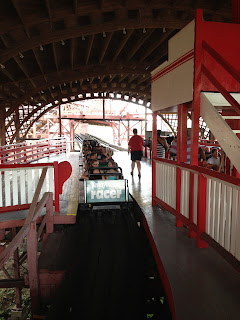 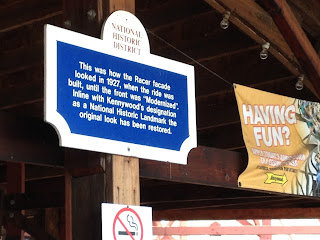 We then rode the Jackrabbit, which is one of the oldest active running wooden coasters in the US, built in 1920.  It makes great use of the hilly terrain to provide a double dipping drop.  For as old as it is, it provides a really nice ride. 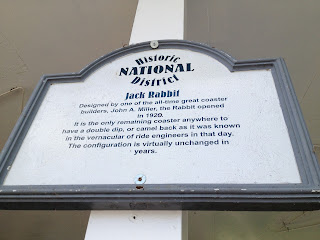 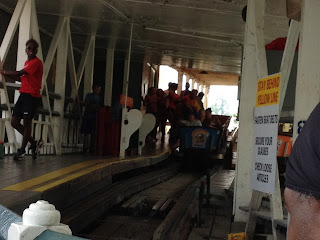 Next, we wanted to ride the Thunderbolt, which for me was the highlight of my only previous trip to Kennywood, back in 1989.  The Thunderbolt was built in 1968, but it was built originally as the Pippin in 1924.  It was dubbed the Ultimate Roller Coaster and King of Coasters by the New York Times in 1974.  It is unique in that it has a huge plunge as it leaves the station, practically going off a cliff into a valley.  It's a great ride, and Melody and I enjoyed it quite a bit.  The only negative is that they only had one coaster running, and waiting in line was excruciatingly hot. 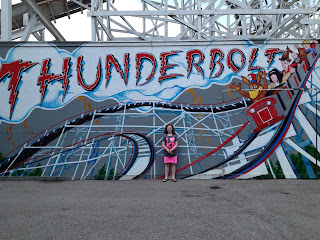 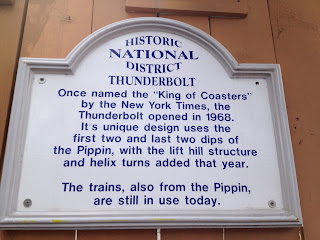 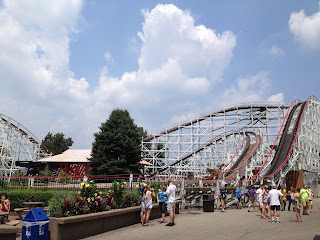 Next, we rode Ghostwood Estate, which is a ride through haunted house where you use a "blaster" to shoot at the ghosts you see as you ride through.  It was fun, though Melody was just a bit scared before we figured out that it wasn't a scary ride.

Then we went through Noah's Ark, which is a walk-through dark ride, built in 1936.  It is a classic, and one of the few still in use.  The ride starts out in an elevator that "breaks down", and you have to make your way through the maze of passages.

We decided to get some lunch at this point, and this is one of the few negatives of Kennywood.  When I was here in 1989, I remembered getting some really good pizza.  So we went looking for the pizza place.  We found the one I remember eating at, but they didn't have personal pizzas, which is what we wanted.  They directed us to another place on the far side of the park, which is where we went.  The pizza was really bad.  This was worse than the worst frozen pizzas you get at the grocery store.  I was very disappointed.  I'm curious as to whether the other pizza place was better, or even close to what I remember.

We rode a few other rides, then decided to get in the long line for the park's centerpiece attraction, Phantom's Revenge.  Phantom's Revenge started life as the Steel Phantom, built in the 1990s, as a major steel coaster.  However, the ride was a bit rough, and was redesigned several years late which eliminated the inversions.  Phantom's Revenge is still a phenomenal ride, based on the reviews I read.  We waited in the slow moving line (with only one coaster running -- I don't understand this policy of the park to run only one coaster on the major roller coasters on a (slightly) busy day in the middle of summer).  After waiting in line for at least 20 minutes, the ride unexpectedly closed, reportedly because lightning appeared in the area.  Melody and I were disappointed, but we understood. 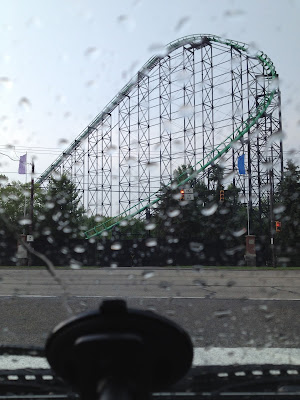 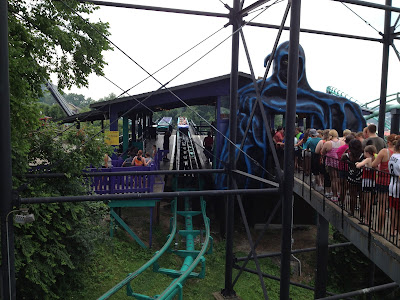 We went back to Noah's Ark once again, which Melody really liked, but then the rain came.  And given the dark clouds and multiple lightning bursts, we decided to grab some souvenirs, then head out.  We were exhausted from the heat.  During the walk back to the car, we arrived at the escalator and it wasn't working!  We had to climb up the stairs.  When we got to the Jeep, the skies opened up and it started to pour.  We headed back to our hotel slightly underwhelmed by our day at Kennywood.  Though we had fun, we had hardly made a dent in our riding the rides.  We missed out on quite a bit.  And we hope to return to Kennywood sometime in the future. 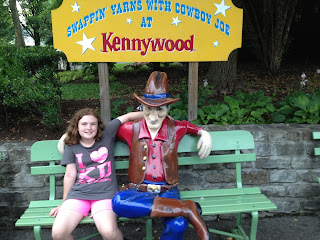 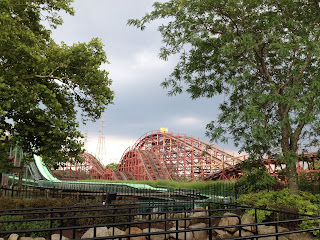 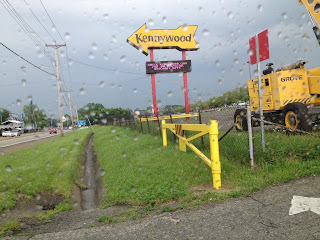 We battled a little bit of traffic on I-376, the notorious parkway, which always seems to have traffic problems.  At the hotel, we rested and regrouped, then decided to go back to Max & Erma's for dinner, since we had enjoyed it so much the night before.  Then we called it a night.  It was a great day, despite the heat and weather.