Two weeks ago, I found out that I would be going to St. Louis for a business meeting.  Usually I have a little more advance notice, especially since these trips mean that I have to find alternative care for my daughter, Faithful Pup Scout, and Macy The Hamster.  Fortunately, my daughter was already scheduled to be with my wonderful in-laws, and, believe it or not, my mother-in-law agreed to having Macy The Hamster spend the week at their home, too.  Faithful Pup Scout was once again sent to my parent's place.  And I was now free to make the trek to St. Louis.

I've been to St. Louis several times before.  The first time was during my big cross-country adventure in which I drove down most of old Route 66 back in 1997.  Next, in 1998, I passed through on my Chicago to St. Louis road trip.  The third time was in 2000, when my wife and I passed through on our big cross-country trip.  Back then, the only real draw of St. Louis, to me, was the Gateway Arch.  I went up to the top of the Arch in 1998.  I regret that, in 2000, with my wife, we did not go up in the Arch due to my insistence that we couldn't wait 2 hours to ride to the top, as we had to keep moving down the road to get to our next stop, much to my wife's disappointment. Lesson to newly married husbands:  make every effort to let your wives do things that are entirely reasonable, even if it means a few more hours of driving for you.  It'll be worth it.

Needless to say, my most recent trip to St. Louis, which began on Sunday evening and ended several hours ago today (Tuesday), was not one I was much looking forward to.  I had already seen the biggest tourist draw in the region.  This would be all business.  And, for the most part, it was. 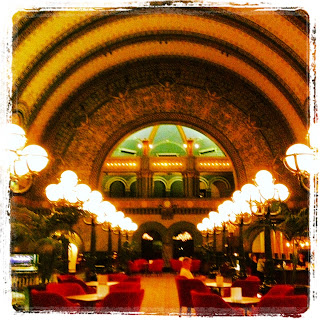 I arrived shortly after 7 p.m. and my boss picked me up.  We rode into downtown and checked into our hotel, the St. Louis Union Station Hotel Double Tree.  It is a BEAUTIFUL building!  It used to be a train station, but was converted into a hotel with an adjoining shopping mall.  The Grand Hall is just amazing.  I think the only disappointment was that my hotel room was what seemed to be about 6 miles from the lobby, and my view was the interior of the mall.  I had to use a taxi to get from my room to the front desk.  After checking in, my boss and I had a very delicious dinner at the hotel restaurant.  She had just flown in from Seattle after a week of vacation, so we both called it a night and decided to meet the next morning to carpool to our meeting.  There were seven other colleagues that would be joining us, though none stayed at this hotel.

Following our meetings, we all went to The Hill, which is an Italian neighborhood about 15 minutes from downtown.  There must be about 25 Italian restaurants in the area, and we decided to eat at Gian-Tony's.  Tony himself was in the restaurant and greeted us as we entered.  We had a wonderful feast!  I had the baked ziti special, which included a delicious sausage and mushrooms.

After dinner, we hunted down and found Ted Drewe's Frozen Custard stand on old Route 66, however there must have been 300 people there.  We decided to just head back to the hotels and crash for the night.

After arriving at our hotel, I decided to shop for a few souvenirs, then I headed back to my room to pack.  I didn't sleep very long, it seemed, and I was ready to head to the airport at around 5 a.m.  I had an uneventful flight, though there were only 48 people on the plane and I had an exit row all to myself.  For a tall guy, that was pretty cool to me!  The only negative was the rainy weather at home, and, upon leaving the parking lot, I paid the attendant with my credit card and asked for a receipt.  The attendant began to cough uncontrollably, and rather disturbingly neglected to cover his mouth.  I was sure he was going to lose a lung or two.  He then handed me my card and receipt, which, unfortunately, was rather damp.  I accepted the documents, and, rather gingerly, slipped them into my wallet.  I then reached for the Purell.  Thank goodness for anti-germ hand cleanser.

I thanked the Lord for keeping me safe and in His grip during my trip, and taking care of my daughter, as well.  I'm happy for short, efficient meetings, and coming home.

Have a wonderful day, everyone!  Tell your family how much you love them.  You can't say it enough!