The Big Adventure Saturday Cheer Up

Yesterday was the last day of camp at Grace Adventures Day Camp for this Summer, and the tears were coming fast and furious.  My daughter, Melody, was very upset that was over, and she said she was really going to miss all of the counselors and her friends at the camp.  It was a wonderful season and she had a great time.  I continue to be impressed with the young adults who run the camp, especially the lead staff, which includes Miss Caitlin, Mr. Caleb, Mr. Ryan, Miss Sarah, Miss Cree, and the Big Cheese, Miss Grace, who the camp is named after (just kidding), not to mention all of the incredible counselors.  My girl keeps telling me to take off from work so I can be a counselor for a week (and, admittedly, given how well the camp runs, I'd love to see how the "magic" happens!).  God has really blessed this place.

Anyway, my daughter spent the afternoon in tears after the final program ended, and my family and I spent that time trying to cheer her up.  Dinner at the new but slightly over-rated Ale House in Columbia (where apparently reservations are encouraged -- who knew? -- even before 5 p.m., when parking is actually still available!) failed to cheer her up completely, and the tears began anew as we got closer to bed time.

I decided to come up with a cheer-her-up plan for Saturday to, well... cheer her up!  We would attempt to get up nice and early, get a diner breakfast, sitting-at-the-counter style, go hiking in the Catoctin Mountains near Thurmont, and then visit Crystal Grottoes Caverns in Boonsboro, followed by Saturday church at Grace Community Church (where we might see some of the camp counselors!).  So that was the plan!

I got up slightly early despite several wake up alarms, and then tried to get my girl up.  That was a challenge, but she got moving once I shared my plan for the day with her.  She was on board!  We left the house at around 9 a.m., much later than planned, but at least we were on our way.  First stop was the Double T Diner in Ellicott City, right across the street from the old long-closed Enchanted Forest.  The place was packed, and we had to wait 10 minutes even though I suggested to the hostess that we preferred the counter.  We ended up getting a booth instead.  That was fine, and our server was a very nice older lady who became our best friend in no time.  Melody had  the chocolate chip pancakes and a side of bacon with a glass of milk.  I had a spinach, mushroom, and tomato omelet with home fries and wheat toast, coffee, and OJ.  It was a great breakfast! 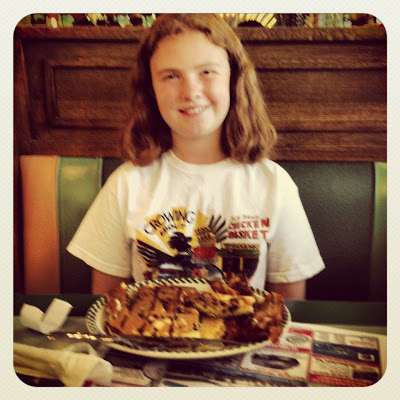 After eating, we hit the road....at 11:15 a.m.  It was no longer early.  And to top it off, we had a steady rain, so we couldn't even put the top down on the car.  We decided to skip the hiking for now and go straight to Crystal Grottoes.  That was when we realized that Melody had worn her flip-flops (her tennies were still wet from camp).  So we stopped off at a shoe store in Frederick.  Fortunately for me, my girl isn't too picky, and we got shoes she liked within five minutes.  But it was still raining, and it didn't appear to be clearing up.

Thinking fast, we decided to rule out our hike, and we stopped at an old favorite of mine in Frederick... Wonder Books & Video!  Wonder Books is a used bookstore that is PACKED with thousands of books, and we picked up a bunch!  Melody was in book heaven, and we came away with about 10 books.  Total price:  $32.

Next stop was Crystal Grottoes Caverns in Boonsboro.  It's a shame the rain was still coming down, since the drive was very scenic.  Middletown, MD, is a very nice little town with lots of big, old, well-kept homes, and a wonderful old-time main street.  At one time, I thought so highly of Middletown that I figured I might settle there.  Boonsboro is much the same, minus all of the stately old homes, but with a charming main street. 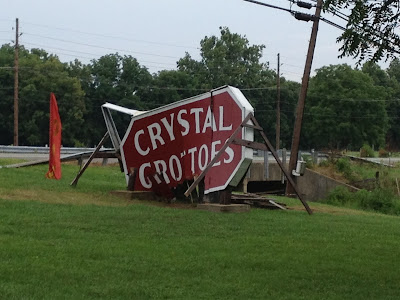 We arrived at the caverns, just a few miles outside of Boonsboro, at around 1:45.  Their sign looks like it was hit by a bus.  Tickets are on the high side, totaling $30 for the two of us.  We loved our tour guide, who gave Melody lots of attention, but she and the owner are apparently very heavy smokers and the smell of smoke is overwhelming throughout the main office, plus they both coughed quite a bit.  We enjoyed the tour, though it was very similar to other tours of caverns we've seen.  It is much less "polished" than, say, Luray Caverns, or Penn's Cave.  It is over rather quickly, despite its 30 minute running time.  The caves themselves are very nice, and provide plenty to see, though there aren't any "Ah-ha" moments, and it is rather cramped.  There really aren't any large "rooms" in the caverns we saw.  I'm also a bit wary of places like this that ask for tips for the tour guides.  My personal feeling is that the customers shouldn't have to "pay" twice, especially at the price they charge.  All in all, it was a good tour, and Melody came away impressed and excited. 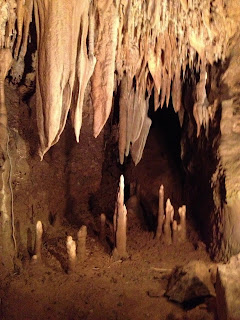 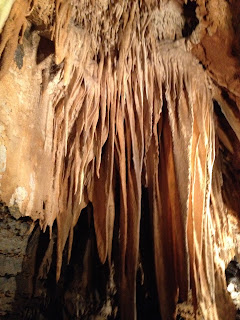 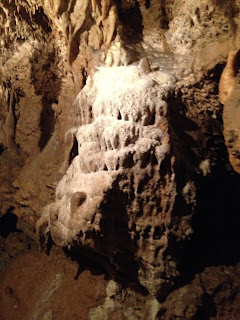 It was starting to get late in the afternoon, so we decided to grab a late lunch, then start heading home.  We found a very good pizza place on the main street of Boonsboro, called Vesta Pizzeria.  The pizza was really good!  New York style is what we had, but they also have a Chicago deep-dish pizza.  The restaurant itself is nice enough, but it appeared to be run by three young guys, none of which was the owner.  But they were polite and did their job well.  The pizza (mine had pepperoni, mushrooms, and pineapple; Melody's was plain cheese) was good but typical New York style.  The crust was crispy but a little tough, the sauce was decent, and the pepperoni not too greasy, but not very spicy, either.  Good, solid pizza, though.

We headed for home in a steady rain, and arrived at Grace just in time for our church service.  We got a nice, thought-provoking message from Pastor Mark, and I appreciate him checking on me just before he jumped on stage.  He's a great guy!

After the service, we headed for home and had a nice evening of nothingness.  My girl seemed very satisfied with her Big Adventure Saturday, even though we had to change our plans because of the weather.  We always have fun together!

Have a wonderful evening, everybody!