On our way home this evening from Ocean City, my daughter and I decided to stop at Sandy Point State Park, on the Chesapeake Bay in the shadow of the Bay Bridge.  I hadn't stopped there since before my wife died, and my daughter had never been there.  The spot is significant as the location of my proposal to Teresa, who agreed to be my wife.  It's special because Teresa loved lighthouses, and the Sandy Point Lighthouse is just offshore from the beach here.  My daughter, Melody, had heard about our engagement, but had never been to this spot, and she told me it was neat to finally see it. 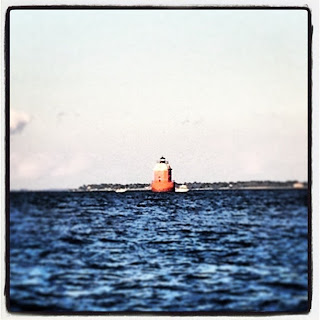 I felt some odd feelings while we were here.  I hadn't visited this spot since my wife and I came here a few years after we were married.  So it has been well over ten years since then.  I didn't know how I should feel.  It was a mix of sentimentality, some sadness, excitement in sharing it with my daughter, and happiness from remembering when...

It was very cold and windy, but I didn’t notice. I was sweating profusely. Poor Teresa was bundled up in her heavy jacket and mittens, trying to stay warm, and looking around in the sand for shells, not suspecting a thing. I directed her towards an area of large rocks, right on the water, and we spotted a large bottle hidden between two large rocks (a bottle my brother, Darren, had placed there before we arrived). I pointed out that the bottle looked like it had a note inside of it, and I picked it up, much to Teresa’s surprise (she thought it was garbage). I pulled out the cork and slid out the rolled paper from inside it. On it was written a note. I had written the note to her a few weeks earlier (on recycled nautical chart paper, to make it look authentic) with the intent of placing it in the bottle for Teresa to find. In the note, I outlined our entire relationship to that point, and mentioned how much I loved her and wanted to spend my life with her. At the end, I had written, “Will you marry me?”

Teresa read the note while I stood next to her, holding it. She told me later that she recognized the handwriting as mine right away, but didn’t understand why it was there. It took her what seemed to me to be a long time (I had written too much, I think), and when she finished, she gave me a curious look, as if she was trying to figure out what was going on. I pulled the ring out of my pocket, which I had been fingering the entire time she was reading the note, and dropped onto one knee on the wet sand. She started to shake, and I don’t think it was because of the cold. I made a little speech, which I don’t remember at all, and asked her to marry me. The realization of what was happening began to hit her, and she took her mitten off and I slipped the ring on her finger. She started to cry and yelled, “YES!” And we hugged and kissed each other for the longest time. Then Darren jumped out of the woods whooping and hollering with the camera still running, perfectly capturing the moment with the lighthouse behind us. Teresa continued to cry tears of joy, and I got a bit misty eyed. I was sincerely happy. Happy that I had surprised her, happy that my plan had worked so well, happy that she said yes, and greatly relieved that it was over! And I was so happy that I was going to marry the sweetest, most wonderful young lady I had ever known!

This was a happy time in our lives.  We had almost five wonderful years as a married couple, though only a short five months for her as a mom.  I was glad to be able to share this scene with my little girl.  I had fun re-telling the story of the engagement, and she laughed along with me.  I'm glad now that we stopped.  It wasn't anything we had planned to do until we saw the lighthouse as we were crossing the Bay Bridge.  It was cool to see it again. 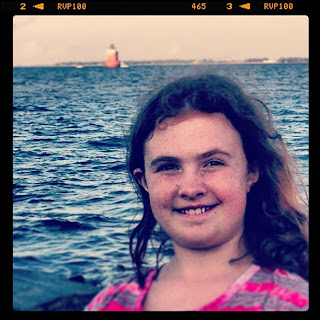 Have a nice evening, everybody!