Melody's home!  I'm very happy to have my girl home with me.  She had a pretty great week with her grandparents.  They took her to the Montgomery County Fair one day, then they took her out of town to Dutch Country, spending a day in Lancaster, PA, and another in Hershey and Chocolate World.  So today they arrived home and invited me over for dinner.  We had a nice visit and a great meal.  Then I brought Melody home.  Macy the Hamster returned home, too.

We came home to an email inviting us over to my parent's place tomorrow evening after church.  My brother and his family are going to be there, along with Mom, Dad, & my sister, and they're going to order a bunch of pizzas and hang out.  It sounds like fun.  In addition, though, Erica, my brother's fiancee, invited Melody over to their place for a sleepover with her girls, Brittany & Caitlin.  That's great and fine with me, but Melody's return home will end up lasting just a day.  She'll be with my parents for most of next week.  And I'll miss her.  Again.

Shout Factory just released a DVD set of the Japanese TV show, ULTRA Q, which originally aired in 1966 in Japan.  It was produced by Tsuburaya Productions and filmed in black and white, and was the first show in the Ultra series of TV shows featuring live action monsters made popular by Godzilla and Gamera.  The show was conceived as a TWILIGHT ZONE or THE OUTER LIMITS type of show.  It has never aired on American TV, and was never released in the United States until now. 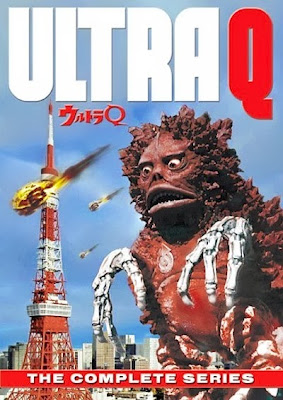 ULTRA Q featured a monster-of-the-week format, where an alien or creature from the sea or underground attempts to create havoc before human scientists and the military figure out a way to stop it.  The show stars Kenji Sahara (featured in many Godzilla movies), a pilot, Hiroko Sakurai (best known for her role on ULTRAMAN as Science Patrol member Fuji), a photographer for a newspaper, and Yasuhiko Saijou, a young protege of Sahara's character.  The three always seem to be in the middle of the action when the monsters attack.

28 episodes of the show were aired, and it was followed by the hugely successful ULTRAMAN, which featured a giant alien superhero who fought with humankind against the monsters and aliens who attached the Earth, and led to at least a dozen spin-offs over the years.  In fact, several of the monsters featured in ULTRA Q ended up on ULTRAMAN, either as the same creature, or slightly modified to appear as a new monster.  In the first episode, the creature, Gomess, is literally a heavily modified Godzilla costume.

The show is very creepy, and makes good use of the black and white filming to create a very atmospheric setting that adds to the tone of the show.  It is played straight, for the most part, and the action and stories are treated with respect and seriousness.  A few episodes are more lighthearted, and likely aimed at children, but the show is definitely made for adults.

If you're a science fiction fan, these shows are great examples of the genre from Japan, and capitalize on the popularity of Godzilla and related monster movies of the time period, but the intent was for the show to resemble the American shows mentioned earlier, particularly THE OUTER LIMITS.  The show is in Japanese, but the DVDs contain English subtitles so it is easy enough to follow the plots.  If you're a fan of ULTRAMAN or Godzilla, ULTRA Q is a must-own and can be purchased through the Shout Factory website or from Amazon.
Posted by Eric Freed at 11:38 PM