The Wrong Movie At The Wrong Time

Sometimes you pick the wrong moment to watch something on TV.  Or it's the wrong thing to watch.  For me, it's both.  I started to watch a movie this afternoon after work and it was the wrong show to watch at the wrong time.  CONTAGION, a movie directed by Steven Soderbergh, and starring, among others, Laurence Fishburne, Kate Winslet, Gwyneth Paltrow, and Matt Damon, has a gut-wrenching opening ten minutes that left me feeling sick and grief-stricken once again.  The fact that I've been battling depression recently as a result of unresolved grief from the death of my wife caused this movie to feel like a blow to my gut. 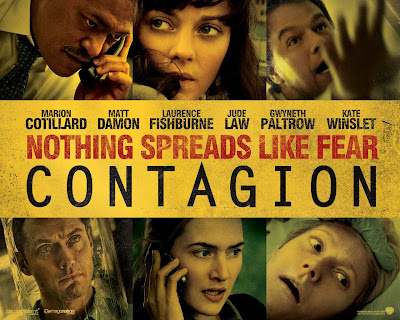 *SPOILER ALERT*
The movie, dealing with an outbreak of a fatal disease, opens with a young woman returning from a business trip in Hong Kong, and she is sick with what appears to be a bad cold.  She arrives home in Minneapolis to her husband and young son and continues to get worse.  The son comes down with the same illness, and within a few days, the wife has collapsed in their kitchen with convulsions.  She's rushed to the hospital and dies.  Meanwhile, the son, who is with a sitter while the parents are at the hospital, has had the same symptoms and is now unresponsive.  He dies, too.

There are moments when I know exactly what Matt Damon, who plays the husband, is feeling.  The scene of the doctors explaining to him that his wife has died were identical to what I experienced when my wife died.  It takes time for it to sink in.  The doctor is always accompanied by a hospital worker who acts as a counselor, and they always ask if there is someone they can call.  This scene took me right back to that moment.  I'll never forget it.
*END SPOILER ALERT*

So it hit me, and I broke down.  Almost every time I encounter a situation like this, I'm reminded of the night my wife died.  I captured that entire time in a previous post on this blog, which I wrote less than two months after her death.  I wanted to make sure I would always remember all of the details of that moment, and that's one reason why it is still so fresh to me.  It still feels like it just happened, though it's been nine years now.

Losing a spouse, especially in such a sudden manner, is not something I would wish on anyone.  It is such a unique experience, one that not many have gone through.  It is a horrible feeling.  My wife and were walking outside of the school she taught at, with our 5 month old daughter and our Faithful Maltese Pup, Scout, when my wife collapsed suddenly without warning.  I was standing about 30 feet away from her at the time, and I rushed to her side.  I was fortunate that our friend and principal of the school happened to be nearby, and she called 911.  I was about ready to panic, not knowing what was wrong.  The police and paramedics arrived.  I didn't know it at the time, but I was a suspect, since I was the only person to see her collapse.  She was taken to the hospital by ambulance, and I had to follow in a police car.  During the ride, I called my parents and my in-laws, and they all made their way to the hospital.

When we arrived, I was led to a private waiting room.  I was not allowed to see her.  The longer it took to find out what was going on, the more I started to panic.  There was a Bible on the table in the room, and I picked it up and read a few verses, hoping to calm myself down.  I prayed.  Finally, a doctor and a hospital worker of some sort entered the room.  They told me they had tried everything they could, but she didn't make it.  She was pronounced dead at the hospital.

I can't put into words the feelings that I experienced in that moment.  All I could think about was my poor little baby losing her mom at such a young age.  I had no idea what I was going to do.  In just a few moments, my life had been completely changed.

The death of a loved one is a hard thing to deal with.  As a Christ-follower, I know where my wife is now.  The question that I kept asking was, "Why?"  Why did this happen now?  Why did God take her at when our daughter was so young, that we were just hitting our prime as a married couple?  How could I be questioning God?  I felt like Job (though, yes, I know Job suffered like no one else...my circumstances were nothing like what Job experienced).  I couldn't get angry at God, and even though I still go through my moments of suffering, I still know better than to be angry at God.  But I got angry at the circumstances, and every frustrating moment had me feeling so helpless.

I was very fortunate to have my family nearby and able to help.  It was necessary, in fact.  I've always been a very self-sufficient person, and it was very hard to surrender myself to knowing I could not do this without help.  I needed them to help me with my little girl, since I still had to work.  But even with their help and support, and knowing God was always there with me, I had so many moments when I felt completely alone.  This is still true, even nine years later.  In fact, when I truly am by myself, when my daughter is off with other family, and even Scout is away, I tend to be at my most down.  That's when the depression hits me and I'm at my worst.

So I'm struggling tonight.  It has been a difficult week, and I'm hoping this feeling will pass, though I know from experience that it needs to run its course, and there's really no timetable for that.  But I know the Lord is with me and will carry me through this.  I pray that he will take care of us and that my little girl will have a wonderful life.