"However painful, sorrow is good for the soul."  Jerry Sittser, A Grace Disguised 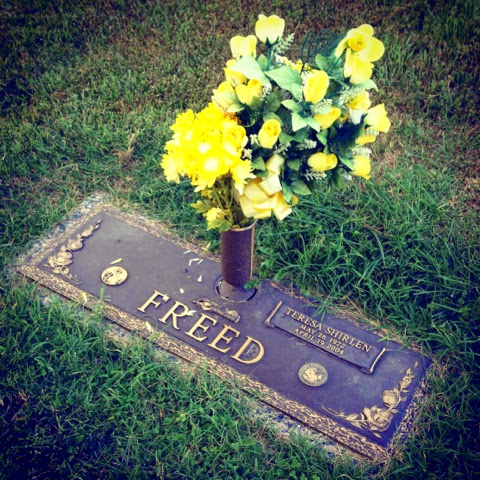 There is no way to prepare for nor to understand what it feels like to lose a spouse until it happens to you.  It has been ten years since my wife died suddenly and I'm still trying to understand and deal with it.

I found myself thinking a lot today about the night Teresa died.  There have been a lot of reminders over the past few days, though I don't think a day has gone by in the past ten years that I haven't thought about her.  I regularly thank God that my daughter, Melody, was only an infant when her mom passed away, if only because she doesn't have to be tortured by how tragic losing a parent can be.  She was much too young to even know who Teresa was, let alone know what it's like to even have a mother.  Her reality is having one parent.  In fact, a few years ago, when I was dating someone very seriously and considering marriage, Melody had a very difficult time connecting with this woman since it was dramatically changing the dynamics of our little family.

A few years after Teresa died, Melody and I were adjusting to her being in the daycare center at my office.  It meant getting her up very early each morning so that I could be at work at my regular time.  She was and still is a night owl, so getting up early and ready was a very real struggle every morning.  We battled regularly.  I hated it.  She hated it.  Those were my hardest days as a parent.  One morning in particular I completely broke down.  The frustration of trying to get her moving and the yelling I was doing combined with her screaming completely overwhelmed me.  I left her in her bathroom and went into my room and I cried.  It was obviously a form of grief, and I sat on my bed crying and praying.  And little three year old Melody heard me and came running into my room, jumped up on my bed next to me, and hugged me as we cried together.  While we still had many rough mornings, that was a turning point for us both, and it was never as bad as it had been prior to that morning.

My friend Gary told me something a few months after Teresa's death that became one of the most significant compliments I ever received, though at the time it didn't seem like it, and I still don't think it's true.  He said, "I don't know anyone else who could have handled this as well as you," in reference to losing one's wife.  I really didn't feel like I was handling it at all, let alone well.  But what it did do was provide insight as to how some people perceived me at the time.  Gary knew I was a Christ-follower, and I maintain that it was all because of God that I was even able to function after Teresa's death.  I don't know how anyone could handle that kind of grief without God's presence in their life.  I have to give Him all of the credit.  I would still be a mess without Him.

At the funeral home the night before Teresa's funeral, a young woman approached me.  I didn't know who she was, but she introduced herself as a young teacher who had worked at the same school as Teresa.  She told me that a few years before, she lost her fiance in a car accident, and Teresa's faith and encouragement helped her through that rough time in her life.  In fact, she was engaged once again.  She handed me a book entitled A Grace Disguised, by Jerry Sittser, which she said had helped her get through her grief.  She wanted me to have it.  And I have to say that the book helped me, as well.  There is so much wisdom in it.  The author had lost his wife, his mother, and one of his daughters in a terrible car accident.  His faith brought him through terrible grief, and a renewed sense of self that helped him begin living again.  I can only repeat what I wrote at the top of this blog.  One can only understand how it feels to lose a spouse (or any loved one) until it happens to you.  But it's only through God's grace that one can find healing.  And while I still struggle with her death, I know that Teresa is with Jesus in a better place, and I will see her again some day.

Have a great week, everyone!