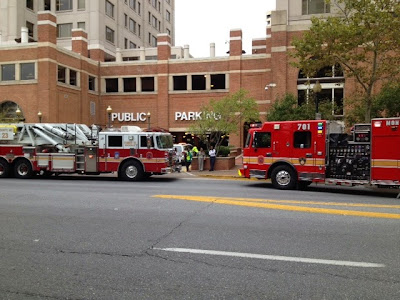 As you might guess from the picture above, I had a rather exciting day.  Things got a little "heated".  With my boss out of the office today, I was left in charge of a serious situation that developed this morning.  At around 11:30 a.m., there was a small "boom", followed by the power going out throughout our office building.  The fire alarm went off, and the building was quickly evacuated.  With my boss out, I had to join the "command center", which is where information was shared as it was made known, and decisions could be made.  Several fire engines arrived and it was soon determined that an electrical panel had caught fire, setting off the alarms.  Because of the seriousness of the situation, we were not able to return to the building for several hours.  It was pretty exciting.

Following all of that, my daughter and I headed over to Nottingham's Tavern in Columbia, MD, where we joined a bunch of very talented people who make up the Howard County (HoCo) Bloggers.  Special thanks to our hostess, Jessie X, who arranged the gathering.  Nottingham's graciously supplied drinks and great food, including Swedish meatballs, chicken, spicy quesadillas, and chips and dip.  My daughter loved the chicken.  It was great having the Wii game set up for the kids who were in attendance, as well.

It was the first HoCo Bloggers gathering that I have attended, and it was great to match up some faces with the blogs I read regularly.  In particular, it was nice to finally meet Julia at Village Green/Town Squared and her daughters, as well as Kirstycat and LisaBMrsS (and her three daughters).  Julia always has a kind word or 10 for me or my blog, and I really appreciate it.

I wish I wasn't such an introvert.  I'm not much of a mix and mingle type, so my daughter and I kind of kept to ourselves before drifting out at around 7:20.  Thanks again to Jessie for setting it all up.  We'll try to come to more of these things in the future.