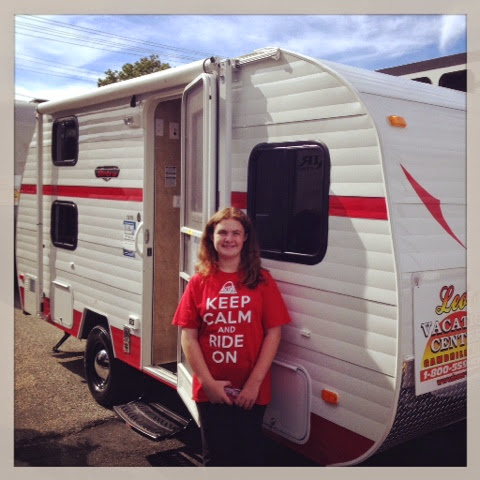 There was an RV Show at the Maryland State Fairgrounds in Timonium this weekend, and with the absolutely beautiful weather today, we decided to go.  Now, we are in no position to purchase an RV right now.  Aside from the fact that I'm paying for another new vehicle for the next few years, there's also the fact that our homeowners association will not allow us to have an RV in our neighborhood.  So this was strictly a window shopping trip.  But it sure is a lot of fun to walk through these things!

RVs have been modernized quite a bit since the time my family had one, back in the 70s and 80s.  They have flat screen TVs, microwaves, automatic leveling, bumpouts, full-size beds, master bedrooms, gas fireplaces, leather couches, kitchen islands, and recliners.  They really are pretty cool.  So we had a blast looking at them.  Some, like the big motor coaches, are upwards of a couple of hundred dollars.  But many, like the one in the picture above, are actually quite affordable, sometimes less than a new car.  This one is much more our speed.  All I really care about is that it has bunk beds, a full-size bed (for me), a separate dining area, a full bath, and a comfortable place to sit down.  In addition, my Jeep can only tow something less than 3500 lbs., so it can't be too big.  We actually found quite a few that fit our criteria, so I know this is doable.  It's something we'll continue to think about.

I've found that I can be very selfish and even jealous when it comes to love, and that needs to change before I can ever consider a future relationship.  I received news today that a female friend of mine just got engaged.  This friend is one I've carried a torch for over the past several years, but I never acted on it because I knew it wasn't the right thing to do.  This is the second friend to get engaged in the past year who I've felt about in this way.  In both cases, I knew neither was right for me.  Either they were too young, or the timing just wasn't right.  But I held out hope that there might be a right time.  Well, in both cases, I took the news poorly, though I kept that to myself.  Where I should be very happy for them both, I instead felt very jealous and upset that they found someone else (even though they had no idea that I felt the way I did about them).  And it makes me angry that I feel this way.  It's not the way a Christ-follower should act or think.  1 Corinthians 13:4-8, which is widely quoted as an important passage describing a loving relationship, says:

"Love is patient, love is kind. It does not envy, it does not boast, it is not proud.  It does not dishonor others, it is not self-seeking, it is not easily angered, it keeps no record of wrongs.  Love does not delight in evil but rejoices with the truth.  It always protects, always trusts, always hopes, always perseveres.  Love never fails."

I need to always remember this in my relationships with all people, not just those who I feel strongly about.  There are no healthy relationships that don't follow this definition of love.  I know better.

So there's this fine young man by the name of Baron Batch, from West Texas, who played football and played it well enough to go to college, graduate, and be drafted to play in the National Football League.  This might be the dream of so many young men, but very few ever achieve it.  Baron did.  He played for the Pittsburgh Steelers and made the team despite injuring his knee in the preseason of his rookie year and sitting out the entire season.  He played well the next year, and again made the team.  He played well on special teams, and was the occasional third down back.  During the preseason of his 3rd year, he was cut from the team.  Rather than accept any of several offers he received from several teams, he elected to retire from the game of football.  He has since pursued a career as an artist (and he's really good, too!), as well as a side business making excellent salsa.  He writes a wonderfully intelligent and thoughtful blog that belies his age.  It's definitely worth checking out.  He wrote a post today giving his opinion of the types of men who play in the NFL, and the type of man he has tried to be.  Please check it out HERE.